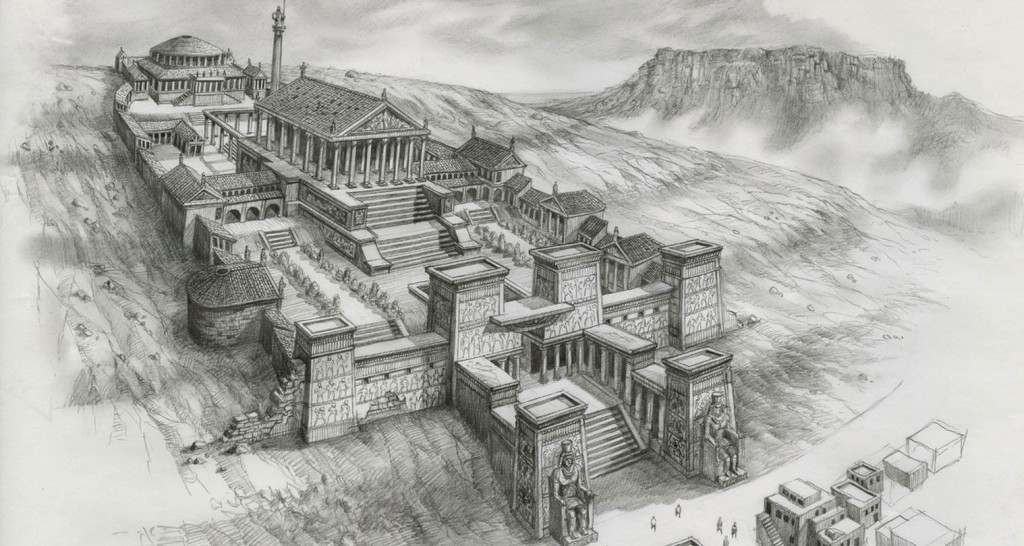 When I was in grade school, growing up in Pasadena, California one of my teachers told us the story of the destruction of the Royal Library of Alexandria in Egypt, one of the largest and most significant libraries of the ancient world. It was beyond my comprehension, even as a child, that any civilization would deliberately burn down such a valuable center of cultural knowledge – it was not just the building itself, but, even more tragic, a minimum of 40,000 scrolls (some scholars say 400,000) documenting the religion, philosophy, life and history of the ancient world were lost forever.

That was the first time I had any sense of the power that stupidity, ignorance and cupidity can have in destroying the cultural and historic fabric of our collective identity. But it wasn’t the last. In our own lifetime, we have been witness to the destruction of the Buddhas of Bamiyan — ancient Buddhist sculptures demolished by the Taliban in Afghanistan in 2001. More recently, there has been rampant destruction of historic cities, sites, buildings and artifacts in the Middle East – the city of Nimrud, Palmyra’s ancient temple of Baalshamin (a UNESCO World Heritage Site), a colossal Assyrian gateway lion sculpture from the 8th century B.C.

However, this kind of malice is not just the work of crazed zealots in some far-off land. In recent decades in Southern California, we have seen the demolition of iconic architectural landmarks such as Irving Gill’s Dodge House in Los Angeles, Rudolph Schindler’s Wolfe House on Catalina Island, Richard Neutra’s Maslon House in Rancho Mirage. We have also witnessed the raiding of vintage furnishings and fixtures from historic homes. Most famously, in 1985, Texas rancher Barton English bought the Blacker House, a 1907 California Craftsman masterpiece by Greene and Greene in Pasadena, and subsequently had it stripped of 48 original Arts & Crafts fixtures, as well as some of the original leaded art glass doors, windows and transom panels. They were sold off for more than he paid for the house (which had cost him one million dollars, while some of the lamps sold for $250,000 apiece). This incident became known as the “rape of the Blacker House.” To make matters even more devastating, Barton sold the house in 1988 for $1.2 million, never even having lived in it.

Thanks to the efforts of Pasadena Heritage executive director Claire Bogaard, the incident attracted national attention. And the City of Pasadena passed the so-called Blacker Ordinance making it illegal to dismantle or destroy original artifacts in any of the Greene and Greene houses in the City.

While this law still stands, the lesson it represents has not been learned elsewhere. A current case in point: When Frank Lloyd Wright’s Storer House – one of four textile-block houses built by the legendary architect in the Los Angeles area between 1922 and 1924 — was for sale, the owners insisted on excluding the original light fixtures. Even after asking the highest price ever for a Frank Lloyd Wright house, the sellers insisted on treating the light fixtures as separate from the house. The buyer was offered the lamps for $85,000.00 apiece. Even though he could afford them, he was not willing to succumb to such extortion. Did the seller relent? At publishing time, some of these lamps are set for auction (this is all the more disturbing because one of the sellers was on the Board of Trustees of both the National Trust for Historic Preservation, and the Frank Lloyd Wright Building Conservancy).

We seem not to learn. In April, Frank Lloyd Wright’s Sturges House, in L.A.’s Brentwood Heights neighborhood, was set for auction but did not sell. Yet, all its important furnishings, including numerous pieces by Wright and John Lautner that were integral to the history of the house, and long-time owners, were auctioned off making it difficult, if not impossible to fully restore the property as the cultural icon it deserves to be. If only the furnishings were auctioned off, after the house was purchased this could easily have been avoided, as the new owner would then at least have had the opportunity to purchase the interior historic fabric.

Going forward, it might be wise for preservationists to take notes from the animal rights activists of PETA and other organizations who have changed the perception of wearing fur as a luxurious, if thoughtless, indulgence in our modern culture. If the National Trust for Historic Preservation and other conservancies were to expose the entrepreneurs, collectors, and auction houses who deal in this type of merchandise, perhaps more of our priceless collective identity could be protected and saved intact for future generations.

That is why I draw your attention to the plight and power of our existing national and international treasures, as showcased in this new issue of architectureforsale.com, Quarterly. It is important to recognize, understand and appreciate the legacy of modern masters such as Elmer Grey, Rudolf Schindler and Bruce Goff who are all featured in these pages. I hope you enjoy learning about them as much as I have presenting them.