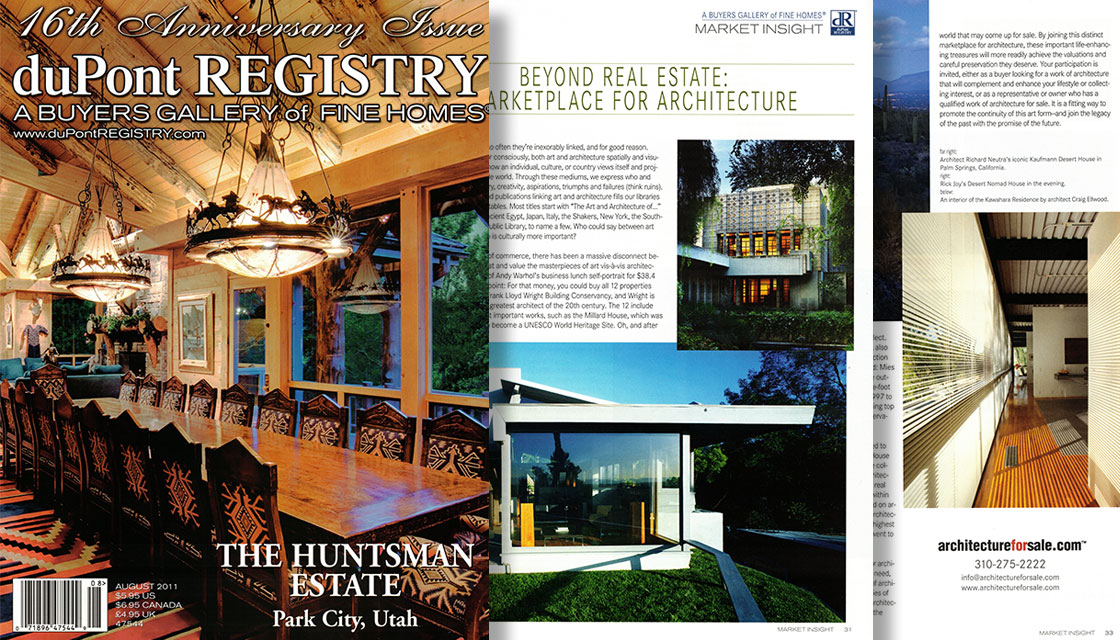 Beyond Real Estate: A Marketplace for Architecture,
By Crosby Doe:
Art and architecture – so often they’re linked, and for good reason.
Whether subliminally or consciously, both art and architecture spatially and visually define and shape how an individual, culture, or country views itself and projects itself to the outside world. Through these mediums we express who and what we are: our history, creativity, aspirations, triumphs and failures (think ruins).

A plethora of books and publications linking art and architecture fills our libraries and graces our coffee tables. Most titles start with ‘The Art and Architecture of…” Just fill in the blank: Ancient Egypt, Japan, Italy, the Shakers, New York, the Southwestand the Boston Public Library, to name a few. Who could say between art and architecture which is culturally more important?

And yet, in the world of commerce, there has been a massive disconnect between the way we treat and value the masterpieces of art vis-a-vis architecture. The recent sale of Andy Warhol’s business lunch self-portrait for $38.4 million illustrates the point: For that money, you could buy all 12 properties listed for sale by the Frank Lloyd Wright Building Conservancy, and Wright is acknowledged as the greatest architect of the 20th century. The 12 include some of Wright’s most important works, such as the Millard House, which was recently nominated to become a UNESCO World Heritage Site. Oh, and after Snapping up these treasures, you would still have nearly $10 million left over to pickup a few pieces now available by the likes of Louis Kahn, Rudolph Schindler, Richard Neutra and Phillip Johnson, And then you’d still have a couple of million left over for maintenance or travel expenses to pay visits (food for thought for anyone looking to leave a significant legacy).

The fundamental challenge in terms of valuation and treatment in our architectural inheritance is that architecture – all of it, the greatest and the least of it, residential, and especially commercial – has been valued and treated almost solely as ‘real estate’. It is sold primarily through Multiple Listing Services across the country, lumped in and valued with tract houses, Mc-Mansions, condos, foreclosures and stucco boxes. Agents and appraisers are trained and buyers are influenced, to value property based on local ‘comparables’ – average prices per square foot in the area with some adjustments for quality and condition. This works fairly well for the general real estate practice.

Like art, architecture is the product of tremendous thought and inspiration. It is generally the reflection of the individual’s vision, or the need to push boundaries and solve problems. It comes from a desire to create a design that not only suits, but enhances, a lifestyle – and not because it has great walk-in closets or a spa tub in the master bath, but because it creates an experience or evokes emotion. When attention is paid to every detail, architecture can take one’s breath away as easily as a Rothko masterpiece.

Some realtors often discount the aesthetic value of architecture with comments such as ‘You can’t put it in a suitcase and take it with you,’ and ‘the three rules of real estate are: location, location, location.’ Sure, these are factors – the same Richard Neutra house would sell for less in Fresno than it would in the Hollywood Hills – but given its cultural importance, as well as the personal enhancement architecture brings to our own lives, those arguments ring hollow.
The physical treatment of architecture has suffered as well, with its millstone label as real estate. If we own real estate, we are supposed to fix it up! When Steve Wynn put his elbow through his Picasso, you didn’t hear, ‘Ah, now is a good time to think about making a few improvements.’ With real estate, even some of our greatest architectural treasures have suffered alteration beyond recognition and demolition. Out-of-scale marble baths, walk-in closets and granite countertops have been installed in structures never originally intended to contain them. Could one imagine the Mona Lisa being ‘upgraded’ while art historians and museums cheer and applaud?

Architecture deserves a more sensitive understanding, and savvy owners and investors, as well as buyers, are beginning to recognize it. Starting in the 1980s, a small core of visionaries – including several Hollywood filmmakers – began to collect architecture. Producer Joel Silver’s passion for Frank Lloyd Wright inspired others. Major television ad directors Joseph Pytka and David Zander began to collect. Wealthy connoisseurs, such as Michael LaFetra and Lord Palurnbo, also collected and were rewarded for their efforts. By the 1990s, the auction houses jumped in, and prices for good works of architecture soared: Mies van der Robe’s 1,500-square-foot, one-bedroom Farnsworth House outside Chicago sold for $7.5 million, and Pierre Koenig’s 1,320-square-foot Case Study house #21 in Los Angeles jumped from $390,000 in 1997 to a sale price of $3.185 million at auction in 2007. Still not approaching top art prices, the market was looking bright for the valuation and preservation of architecture.

Appreciation came to a standstill when Christie’s Auction House failed to close their $19.1 million sale of Richard Neutras Kaufmann Desert House in Palm Springs, California in May 2008. That setback, along with the collapse of the mortgage market that year, pulled even our greatest architectural treasures backwards from artistic and cultural valuation toward real estate valuation once again. Panic legislation over appraisal abuses within the real estate industry crippled appraisers’ use of added value based on architectural significance. Even with these challenges, the market for architecture is once again moving forward. Despite a crippled economy, the highest sale price ever recorded in the MLS in Manhattan Beach, California went to a work in original condition by architect Raymond Kappe.

Today more than ever there’s a need for a marketplace exclusively for architecture outside of traditional reel estate marketing outlets. To fill this need, architectureforsale.com was created to showcase important works of architecture for sale, and to provide a point of reference for other properties of architectural and cultural merit (in many cases their importance as architecture may not be recognized in standard MLS listing formats) around the world that may come up for sale. By joining this distinct marketplace for architecture these important life-enhancing treasures will more readily achieve the valuations and careful preservation they deserve. Your participation is invited, either as a buyer looking for a work of architecture that will complement and enhance your lifestyle or collecting interest, or as a representative or owner who has a qualified work of architecture for sale. It is a fitting way to promote the continuity of this art form – and join the legacy of the past with the promise of the future.

Transcribed from duPont REGISTRY article for inclusion into website: June, 2011.