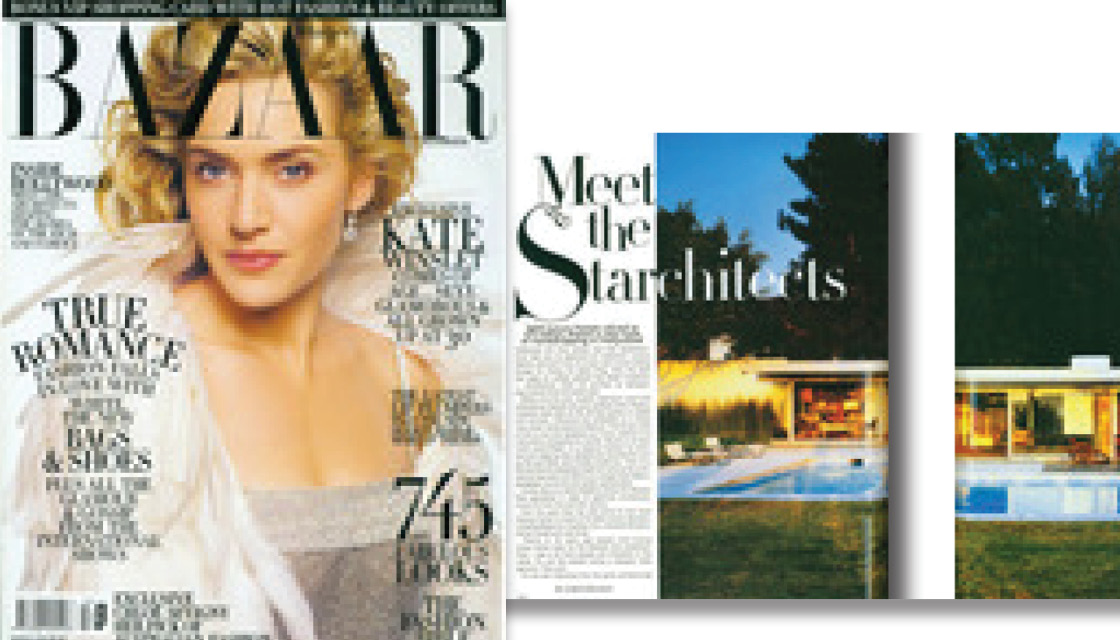 With luxury homes valued at $75 million, there’s a new type of namedropping in Hollywood.

Hollywood folk have always had their obsessions. From fast cars to expensive art collections, couture fashion, and rock & roll; it’s a town with a never-ending hunger for finding the latest thing. Over the past few years an unlikely passion has beset Tinseltown. Architecture. Enter the architect as demigod, pop-cultural force and tastemaker.Where once the size, location, bathroom count and ostentatious features like pool grottoes (think Playboy mansion) were seen as the ultimate signifier of wealth and success, Hollywood has embarked on a brave new world: name-brand architecture. The ne plus ultra of chic is now who designed your home, whether it’s a mid-century showpiece by Lautner, Neutra or an early Frank Lloyd Wright, or a massive mansion by architecture’s reigning stars (dubbed the starchitects) such as Richard Meier and Charles Gwathmey. Think of a Richard Neutra-designed modernist home as the architectural equivalent of a Birkin or a vintage Aston Martin: pedigreed, recherché and quietly sophisticated.

Crosby Doe is a native Angeleno whose firm Crosby Doe Associates specializes in sales of significant architecture, much of it from the mid 20th century.

Over the years Doe has sold some of LA’s most famous homes to some of its better known denizens, including Madonna, Courtney Cox, Leonardo DiCaprio, Simon Cowell and Joel Silver.

Twenty or 30 years ago people were buying these homes really for the lifestyles they presented. “Now, I see a lot more people just interested in the name. It’s just like people having a designer label garment,” Doe says. It’s not just Hollywood that has gone architecture mad, the trend extends beyond the Los Angeles architectural cognoscenti, where the fashion world is following suit. Miuccia Prada attracted attention for her $40 million Rem Koolhaas-designed store in Soho, New York. Giorgio Armani commissioned Tadao Ando to design his theatre in Milan. In fact, architecture aficionados such as Tom Ford and LVMH owner Bernard Arnault are approaching property in the same way as they would art, snapping up homes, starting collections and watching the values skyrocket.

Doe believes it’s only the beginning for the big bucks architectural-name game. “In terms of sales, we’re looking at one record after another. But I think when we compare this to a baseball selling for $1 million or a Picasso selling for $135 million, we’ve only just begun. I think those significant pieces have just started and are going to take the real estate market into new realms. Great architecture has many, many things to offer. It is extremely limited in terms of supply and Hollywood can’t get enough.

So how did Hollywood become so obsessed with design and architectural greats? Brad Pitt would have to be the first bold-faced name to come too mind. In interviews, Pitt has repeatedly stated that Guggenheim Bilbao architect Frank Gehry is one of his idols, and is happy to wax lyrical about his love of modernist design. Pitt reportedly met the architect after asking him to redesign the wine cellar in the home he shared with then wife Jennifer Aniston. Proving just how mainstream celebrity architecture has become, there was even recent tabloid speculation that the divergent aesthetics of Pitt and Aniston was a factor in their breakup, he modernist and clean, she a touch more homely.

Recent tabloid reports placed Pitt and Angelina Jolie in Malibu shopping for modernist digs, perhaps similar to the Kenaston Palm Springs residence that was featured in their controversial W photo spread. Always quick to hone in on nuances of popular culture, The Simpsons recently featured Frank Gehry in an episode. In 2004, esteemed director Sydney Pollack released his documentary debut with Sketches of Frank Gehry.
Doe has seen the Los Angeles architecture craze go mainstream in the past half decade. “One of my older clients from years ago, Joel Silver, was really instrumental in proselytizing LA’s great architecture. There are people like [TV producer] David Zander who owns [Frank Lloyd Wright’s classic] La Miniatura as well as a Greene and Greene house,” he says.

Of course, it does help that Southern California has long been regarded as the perfect geographic muse for architects ranging from Le Corbusier to Frank Lloyd Wright. The area arguably boasts the finest collection of modernist architecture the world over.

Brad Pitt is not the only A-lister with a penchant for architecture. Courtney Cox Arquette bought a 1979 John Lautner timber, concrete and glass classic in Malibu for $10.4 million in 2001. While Cox’s post-Friends bank account could probably buy any home in Los Angeles, she reportedly had her eye on this one for some time. Cox actually studied architecture at university and had been a long time fan of Lautner’s.

Last year, Star Wars ingénue Hayden Christensen even suggested he was quitting acting to pursue studies in architecture and design and after a string of home redesigns, Lenny Kravitz has launched his own design business, Kravitz Design. Not since Palm Springs/ halcyon days has a Tinseltown generation been this designed focused.

Celebrities and the super rich who can’t find an existing great or find their size limiting, tend to opt for one of the new breed of architectural players or ‘starchitects’, a pack that includes Frank Gehry, Richard Meier, Tadao Ando, Michael Graves and Charles Gwathmey, many of whom are bringing the ideals of modernism into the 21st century. While many of these architects rose to prominence through their influential and often audacious public and commercial buildings, the residential arms of their businesses are now an increasing concern.
“We’ve definitely seen a huge increase in demand for our residential spaces,” says American architect Richard Meier, best known for his design of the $1 billion Getty Center in Malibu. “I think the elevated interest in architecture is great because it means we’re going to have better quality architecture everywhere.”
Meier’s signature use of glass and white paneling has attracted a fervent celebrity clientele. Before the Meier-designed Charles street, New York tower was even near completion deeds had been signed by Martha Stewart, Calvin Klein and Nicole Kidman. And Meier admits that a little celebrity wattage doesn’t hurt the sales of a large residential building.

When it comes to unusual requests for design elements or spaces in the homes, Meier says he’s used to being thrown curve balls. When clients like Matrix producer Joel Silver requests a media room, they may well mean a luxury cinema complete with editing suite and bar.

With wealth creation rising exponentially on the back of the entertainment industry, billionaires such as David Geffen and Steven Spielberg have virtually bottomless budgets for the design and construction of their homes , these guys can certainly afford to use an architect at the very top of their field. Charles Gwathmey is perhaps the most prolific of the residential starchitects working right now and has designed houses for all three Dreamworks founders, as well as other moguls such as Michael Dell and Ron Meyer.

So what is the design process like when your average client is an overachieving billionaire? “Well, I think they’re all smart,” says Gwathmey. “Some are more visual than others, like Spielberg who is very visual, and then others like Michael Dell are incredibly focused and smart, but less visual. Everybody has a commitment to trusting and wanting what we can do. It’s a very engaged dynamic dialogue that we have. And that’s why the houses are usually really refreshing because you get patrons, people who are really committed and push themselves in creating something great.”
Gwathmey has seen the size of residential projects grow in the past few years. In fact, his recent home for Michael Dell in Texas totaled more than 10,000 square metres. His clients put an emphasis on “spaces that are more interactive and participatory. Everyone wants a gym and a media room. [NBC Universal head] Ron Meyer’s media room is the larges we’ve done, but it also has a pool table and he plays pool for hours at a time”.

Malibu, a fabled stretch of Californian coastline running 43 kilometres along the Pacific Coast Highway, is without doubt the nexus of the current architectural boom. The area was once a bohemian escape dotted with beach shacks and home to a creative vanguard that included Joan Didion and Jane Fonda. Now, those shacks have largely been demolished, making way for a mammoth land grab and construction frenzy. Not bad for an area that is prone to tidal floods, mudslides, fires and the occasional closure of the highway.

Of course, even the Bu has a hierarchy. Carbon Beach, dubbed billionaires beach (or deal beach) is home to David Geffen (whose home was recently unofficially valued at $75 million), Jeffery Katzenberg, Yahoo CEO Terry Semel, Hard Rock founder Peter Morton, and Jennifer Aniston, who rents. The mega moguls generally buy contiguous plots, merge them and plan an architectural showpiece. If having an unlimited budget really is an architect’s idea of paradise, Malibu must resemble utopia with ever-widening budgets. While Richard Meier believes the era of the unlimited budget may indeed come, he thinks in Malibu’s case, “we’re saved, primarily by the lack of undeveloped land remaining.”

Crosby Doe recalls attempting a visit to Jeffrey Katzenberg’s Malibu beach ‘pad’, which sat adjacent to one of his client’s homes. “I knocked on the door personally, though I didn’t get further than the entranceway to look at it,” says Doe of Katzenberg’s Gwathmey-designed home. “Even after 30 years you might say that I could have been a little used to architecture and fabulous homes, but my jaw almost dropped when I saw how beautifully it had been done. It’s absolutely huge,” says Crosby Doe. Not quite in the bucolic beach house spirit, but not too bad either.