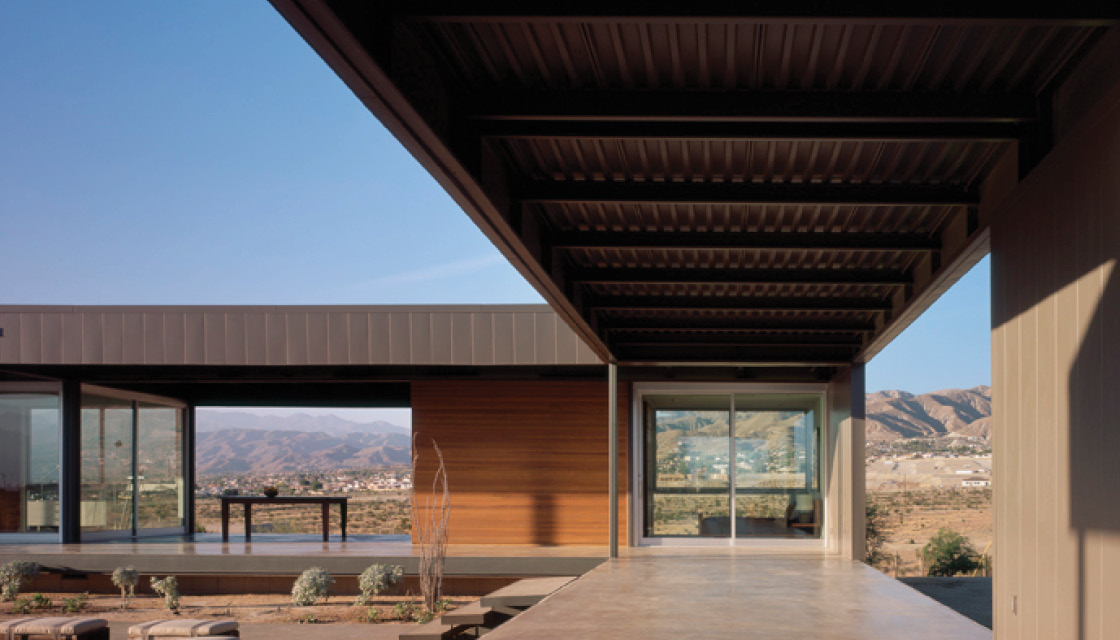 It is the house that won new respect for factory-built prefab housing: Leo Marmol’s sleek, solar-powered, steel-and-glass Desert House in Desert Hot Springs, Calif. It has been Marmol’s weekend house since he built it in 2005, but it is now listed for sale for $1.85 million. The buyer will have a unique home that has been widely praised for its blending of mid-century modern design with environmentally friendly materials and construction. The Los Angeles Times Sunday Magazine called the house “Prefabulous,” and GQ called it a “masterpiece in a box” and “far and away the most stylish and sexy of its kind.”

The L-shaped house is the prototype for Marmol Radziner Prefab, an architecture and design firm based in Los Angeles. Framed with recycled steel, it features teak cabinets, concrete floors tinted the color of desert sand and glass walls. It consists of 10 modules in all — four house modules and six deck modules, to encourage outdoor living. The three-bedroom house features a guest wing with studio space, partially shaded decks, a swimming pool and sweeping mountain views.

“We very much live on the outdoor decks,” Marmol said. “It’s incredibly peaceful. The relationship to the mountains is both powerful and serene. For us it was a wonderful escape from Los Angeles.”

Marmol Radziner Prefab designs and builds highly customized houses, but they are all constructed at a factory in Vernon, which produces modules about 8 feet wide and 12 feet long. Prefab housing construction is gaining supporters because of its potential to hold down construction waste and costs.

“Once you move into the control of a factory environment, you minimize a huge volume of waste, and site-built construction generates tremendous waste,” Marmol said. That said, the Marmol Radziner homes are not cheap, often priced well above $1 million when fully complete.
“We’ve completed and installed two homes, and two are in the factory, and another 20 or so are lined up behind them,” Marmol said.
Marmol said he was selling the Desert House because he is designing a new home — also a prefab — that will be built in his factory and assembled in Venice.

Size: The house has three bedrooms and two bathrooms in about 2,100 square feet of indoor living space, and an additional 2,400 square feet of outdoor living space, and sits on a 5-acre lot.
Where: Located in Desert Hot Springs, Calif., the house has views of San Jacinto peak and the surrounding mountains.
Listing agent: Crosby Doe, (310) 275-2222

Art Market: My House is your House