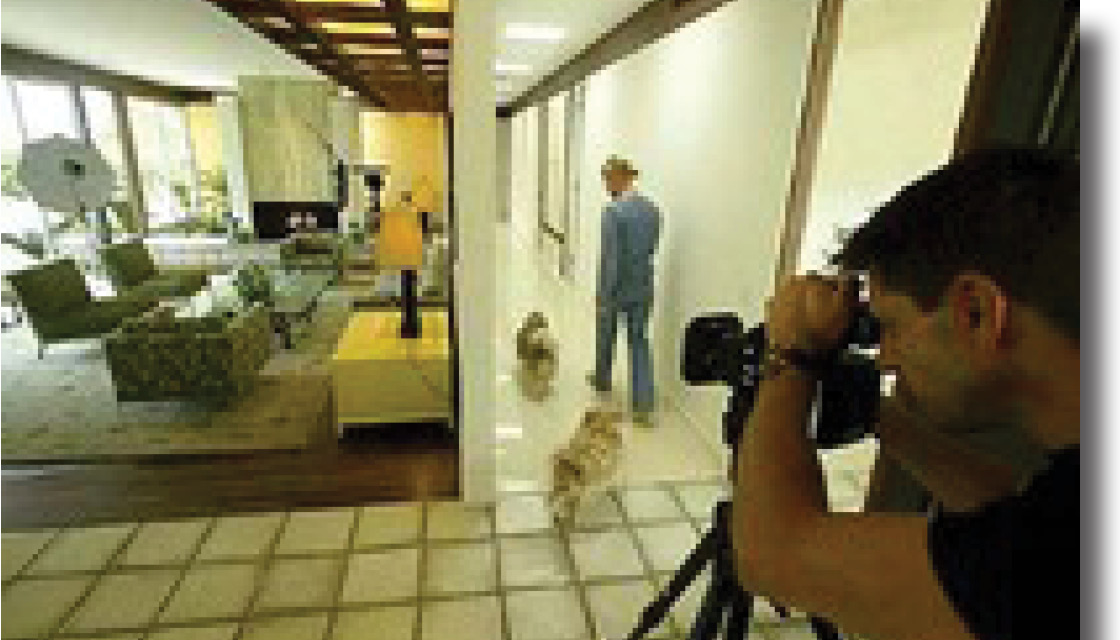 In the two years since Diane and David Glean purchased their 1960s post-and-beam in Brentwood, practically the only visitors have been a steady stream of restoration specialists. But now that every tile and midcentury sofa is in place, the last specialist has been penciled in: the professional photographer. After working years to create the picture-perfect home, the Gleans are finally going to have the pictures to prove it.

Homeowners – whether they’re DIY designers, architecture buffs or nostalgia-prone memento seekers – are conscripting some of the city’s best architectural and interior photographers to document their digs in full-color glory. And they’re paying professional rates to get it: up to $3,500 a day, film and processing not included.

“It’s become a status symbol to have your house professionally photographed,” says Margaret Russell, editor in chief of Elle Decor. “People want their homes shot as if it were a magazine layout, from the powder room to the boudoir. I know people who have spent up to $10,000 to fly in a photographer whose work they’ve seen featured in a magazine.”

For some, however, it’s not simply a matter of filling a personal photo album with styled souvenirs of their living room and kitchen – they’re aiming for a 12-page spread in a home-decorating bible such as Elle Decor or Architectural Digest. Consider it the homeowners’ equivalent of winning an Oscar, and what’s $10,000 when you can have all the world oohing and aahing over your home without inviting a single guest.

Art Gray, a professional photographer who freelances for Architectural Digest and Sunset magazines, had already scouted the Glean house on two previous visits. On the day of the shoot he arrives with an assistant, 36 rolls of transparency film stored in an Igloo cooler, a box of Duraflame logs and a call sheet of shots that he’s scheduled around the sun.

At 10 a.m. he’ll start in the living room, which he’ll shoot from two angles – one that will capture $700 in flower arrangements that Diane had delivered that morning. Afterward, he’ll move on to the dining room, master bedroom and entry. Gray’s day will build toward the “magic hour,” which is really only 20 minutes of twilight when “houses smile back to the camera.”

For the Gleans, the magic-hour shot will be an exterior looking toward the den and kitchen, framed by a lighted swimming pool beneath and indigo sky above. And even on the black and white Polaroid that Gray uses to test lighting and composition, it’s not much of a stretch to envision the words “House & Garden” or “Architectural Digest” emblazoned above the roof line of this Buff and Hensman home.

Not that the Gleans are interested in sharing their home with the world. When Gray delivers the final edit of 10 to 16 transparencies – none of which will feature them or their four dogs – Diane will stow them away with images of their previous Don Wexler-designed home in Palm Springs that Gray photographed two years ago.

“We’d never hang these photographs on our walls,” says Diane. “It’s more like a baby book of our house. If you have a beautiful baby, you hire the best photographer money can buy.”

After spending months scouring furniture showrooms, auctions and flea markets for era-appropriate accessories, her home is ready for its close-up. “Art will make this house look 10 years younger and 10 pounds thinner,” Diane says. For others, such as Patricia Moritz and CJ Bonura, hiring a professional photographer is a personal and a professional endeavor. An architect-builder known for restoring midcentury homes, Bonura hired two photographers – one specializes in interiors, the other exteriors – to shoot his house, the 1956 Ohara Residence by Richard Neutra in Silver Lake.

Moritz and Bonura’s desire to photograph the house became even greater when they decided to move. They worried that the home’s next tenants would update it with anachronistic contemporary kitchens and bathrooms and undo their seven-year, to-the-letter restoration, which included finding Neutra-approved kitchen linoleum squares and furnishing it with era-specific egg chairs and George Nelson lamps.
But the photographs became more than just a memento of their dedication to the original design; they also made their way into a couple of coffee-table books, including last year’s “Hollywood Style,” an Atlas-size tome that puts their house in the company of some of the city’s best-known properties.

Even professional photos of a home that haven’t been published have become “an extreme object of desire to homeowners,” says Crosby Doe, the founder of Crosby Doe Associates, an agency that specializes in architecturally significant homes in Los Angeles.
“We just sold a 1952 Rodney Walker house that had about 10 Julius Shulman photographs of the house hanging on the wall. The buyers insisted they come with the house, and luckily the sellers complied. It’s all part of that pride of ownership thing,” says Doe, who routinely makes greeting cards for clients using exterior shots of their recently purchased homes.

Photographer Mary E. Nichols, who has worked for Architectural Digest for almost 25 years, is often seen as a conduit into its pages. “For some people, a house isn’t completely finished until it’s been photographed and published,” says Nichols, who has shot dwellings as diverse as Saudi Arabian palaces, Tuscan villas and Malibu mansions.

Nichols, who charges private clients about $3,500 per day and often needs two to three days to get the 16 shots generally required for magazine consideration, does not offer any guarantees on getting homes published. In fact, because Architectural Digest receives 5,000 to 6,000 annual submissions, she says the likelihood of getting into the glossy is slim. “It’s a gamble and I tell people that,” says Nichols, “but a lot of them put their heart and soul into these homes and want them documented regardless.”

For homeowners willing to play the odds, however, working with Nichols offers another benefit: inside information. Each magazine is known for its visual dos and don’ts, and in this way she’s able to edit objects and arrange rooms in ways that will most likely meet with magazine approval. Not only is Nichols versed in Architectural Digest basics – no zebra rugs or fur pillows, no unlit fireplaces or candles – she’s also aware of the subtler proclivities of its editor-in-chief, Paige Rense.

“She’s tired of Boston ferns and throws on chaises,” says Nichols. “She doesn’t want any of those cliché?s like open books with reading glasses on them.” Elle Decor comes with its own set of rules. “We never burn candles during the day or have fireplaces on with the windows open,” Russell says. Most important, unlike Architectural Digest, Russell says she never considers projects where homeowners have commissioned the photography, even if they’ve hired from her stable of freelancers.

“If someone’s ultimate goal is to get published, I’d much rather get scouting shots,” says Russell, referring to the more casual snapshots that are usually sent to magazines for editorial consideration. The rule seems counterintuitive to most homeowners, who think that by picking up the photography bill they’re more likely to get accepted. For Xorin Balbes, who renovates and decorates homes in Los Angeles, getting his Los Feliz Frank Lloyd Wright house into Architectural Digest represented something of a dream. “I wanted to get my design and renovation work out there, but I also wanted to share a house that is like a beautiful piece of art with other people,” Balbes says. So he hired Gray, who photographed the Mayan temple-like house and had Balbes cast friends for an in-progress dinner party for the kitchen-bar area shot.

For the magic-hour photo, Gray directed Balbes into the hot tub, flanked by glowing torches. The gamble paid off. In 2001 Architectural Digest featured Balbes’ home (although the magazine had the home reshot). “After it came out, people from all over the world were calling me.”

Vanity – possibly. But in a city full of property flippers and attention-deficit homeowners, many don’t stay under one roof long enough to accumulate albums-worth of Thanksgiving-dinner and Easter-egg-hunt photography. “A lot of this is a byproduct of a fickle housing market,” says Gray, who finds that many clients want to document their homes just before putting them on the market. “People are constantly upgrading, fixing up, moving on. It’s happening so fast that they’re longing for some way to remember it all.”

Jean-Maurice Moulene, a Beaux Arts-trained architect, moved four times in just a few years when he came to Los Angeles with his family in 1996. So he started making architectural renderings of each home to create a “visual scrapbook” for his children. Accurately scaled, with whimsical touches, his renderings unwittingly tapped into an American obsession, Moulene says.

“Americans love their homes and they want to share them. They love to give tours of them,” says Moulene. “In France, if you go to a dinner party, you would only go in the dining room and the living room. You’d never be invited to see the private rooms.”
After he used one of his renderings for a Christmas card featuring his 1924 Hollywood Hills home, friends and friends of friends began commissioning drawings for themselves.
“Most of my clients have already had their homes shot by famous photographers,” says Moulene, who charges between $1,200 and $10,000 for the hand-drawn renderings done in India ink, watercolor and colored pencil.

“They also want the renderings because they can manipulate them for spin-offs. People have the images transferred onto things like dishes, stationery and hand towels. It’s like having an architectural monogram of your house.”

For people who would rather put that kind of money toward a plasma TV or a new sectional sofa, the idea of spending thousands on home photography has a distinct ring of excess. But even if the urge to photograph starts as an ego-inspired endeavor, the results can have unexpected benefits.

“I’d give anything to know what my house looked like when it was first built with its original furniture,” says Nichols. “When you build a wonderful house, I think there’s almost an obligation to archive it.”

Cher, whose homes Nichols has shot, comes to mind. “A hundred years from now they’ll talk about her and someone will be standing in what was her house and they’ll be holding those photos. And in that way, the photos become one continuous string that connects the life of the house.”