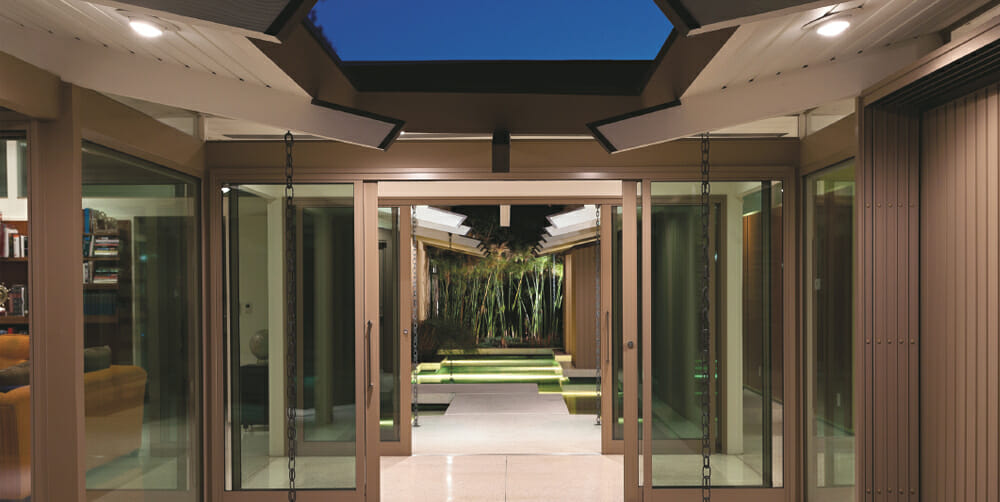 Behind great architecture there is always a great client. It is a known fact. The past ancient and recent is full of such examples. That kind of patronage is both rare and precious. Its scarcity is self-evident in the blighted built environment of our time. In fact, it takes concerted effort and sustained determination to transcend a list of project requirements to conceive and realize memorable space. It is about acting on the understanding that architecture has tangible qualitative benefits in the unfolding human experience. It is also about pursuing the realization of a particular vision over a period of time against logistical adversities. This is the secret of the milestones of world architecture.

The Renard Residence is a paradigmatic example of the client-architect synergy: a serene achievement resting on a most majestic landscape. Everything here speaks aesthetic silence, spiritual regeneration, and healing. Its quiet stillness is hypnotic and transformative: it is shelter and temple, dwelling and retreat. It is an architectural panegyric to the spectacle of the elements. In a reversal to the customary siting of buildings on their land, here architecture is background to nature. But there is one notable exception that distinguishes this feat from similar undertakings. While it is extraordinary for dedicated clients to come by, a chronic predicament many architects lament, it is even rarer to have a client take a leading role in steering the design where the architect left off to actualize its latent potential. The slow maturation of a coherent image of what place was going to be is what singles out such structure from many designs of mid-century vintage.

The current owner, Julius Renard, bought the property in 1999. The original cell built in 1959 carries the signature of post-war architect Richard Dorman, who designed among many projects the residence of former Los Angeles Times art and architecture critic Art Seidenbaum and the Playboy West headquarters on Sunset Boulevard. While the Dorman portfolio is rich in glamorous commissions, from its inception this compound was subdued in character and scale, but no less grand in design intent: two one-story pavilions were laid out parallel, yet offset to each other, and connected through a glass link. This earliest parti is a standard solution in mid-century planning on un-built lots in low density areas. Subsequent owners started modifying the plan with ad hoc interventions contradictory to the circulation flow scripted into the original scheme. Over time the accrual of these modifications compromised the clarity of the initial layout.

Upon taking possession of the residence, Mr. Renard learned quietly about the rhythms of the place. The land was the teacher to a student ready to listen to its messages. The cycling of the seasons, the daily breeze going through the house, its ever changing flavors at different times of the day, all conjured to heighten his understanding that in its current state this property was an unfinished project to take on and sublimate into a personal haven. The commanding landscape had maximum impact on him from the start. And although the land around got its share of design attention, it was the house that needed heavy recalibration to respond to the opportunities the natural setting was offering.

Noted Northern California architect Warren Callister once said that architecture is a business of listening. That type of listening for Mr. Renard was a one year affair. Ensuing that observation period, he set to start work on the property with a string of incremental changes guided through intuition about what his house needed rather than a logical sequence of rational decisions. The design concept for the house indeed evolved over time. That explains why for an approximate 3,600 square-foot residence and guest house the number of professionals involved is nothing short of unusual: two architects, one architectural designer, one interior designer, two landscape architects, a structural engineer, two general contractors, and landscape contractor! The house was completed in late 2003 and with remarkable design consistency considering the group of professionals involved.

The structure’s physical growth was not linear. It was organic. There were micro-incidents in the process of the transformation to its final stage. Yet, the architecture exhibits cultivated integrity to its most minute details. How did Mr. Renard pull it off? Certain philosophical underpinnings provided broad guidelines for the work to move forward toward a rational outcome. For the owner, this place needed to be physically nurturing and decisively undogmatic in its adherence to the modernist tenets. Through this house, he was interested in promoting awareness in users and visitors alike. It was a conscious strategy to reverse the curse of architecture, typically “experienced in a state of distraction” as 20th century philosopher Walter Benjamin aptly noted.

“Structures reflect our outlook.” Mr. Renard remarks. They also mirror our personalities, it is fair to say. That is why the progression of spaces from the entry gate on Woodrow Wilson Drive to the unimpeded linear deck oriented toward the distant Miracle Mile keeps visitors on the edge of constant discoveries. That was my own impression in reading Mr. Renard’s individuality. From the street, a finely graveled path gives a cue about a probable destination with no additional information to anticipate what lies at its end. After coasting along a windowless guest house, the car lands on a carefully landscaped drop-off zone. Here a cluster of pavilions gives off a message of unexpected urbanity. Is it a small village? Are these multiple properties? The answer is subtly revealed in the imminent architectural experience. No formal entry unequivocally signals the front door. Instead, it is the intuitive circulation that funnels visitors toward precisely cut floating terrazzo platforms laid out on a shallow pond. Variety and order here marry intelligibility (as well as safety) of use with aesthetic interest. The counterpoint to the consistent spacing of the stones toward the path of travel is the variable alignments of their edges in the perpendicular direction. There is playfulness and rationality in one and the same space strictly defined through the linkages between the various masses. Looking straight into such a highly controlled void your only choice walking toward it is to make a sharp right turn. It is at that point that a complete change in spatial reading takes place.

From a plan layout viewpoint the separation between private and public areas are hinted rather than explicitly stated. In the masterful transition from the public sphere (Woodrow Wilson Drive), to the semi-public (vehicular lane leading to the house), to the semi-private (entry sequence), to the private (master bedroom), the semantic barriers are merely suggested, not physically marked. The glassed entry link connects the living room, kitchen, dining area and den. Keeping the appliances and the cabinetry as the only fixed pieces in the overall architectural composition, the furniture is meant to be constantly rearranged to respond to the mood of the inhabitants, and their attunement to the surroundings. Together with the guest house raised on steps these two areas relate to each other in a courtyard like arrangement around a swimming pool, a hallmark of Los Angeles living. The striking transparency of the house is exhibited in its full glory when standing inside the guest house: sightlines pierce through three layers of glass all the way out past Park La Brea to San Pedro. The perk of being inside the pavilion on the outer edge is the openness of that deep deck where the city is figuratively offered on a tray for the occupants’ visual delight.

A common feature of the building components interfacing with the ground throughout the house is that they are lifted up on, not to be anchored. The eyes can follow a continuous shadow line that makes the volumes weightless, light, and immaterial. And it is the erosion of the enclosing boundaries that is the biggest surprise once that sharp turn has been taken. Airflow is the intangible material with ubiquitous impalpable presence bestowing visual overflow. Deep sightlines penetrate the extent of the plan as if x-raying its bodily chassis. Unobtrusive floor to ceiling shades provide privacy when needed. The module underlying the orderly architectural growth is readable, but not constrictive. At first impression this appears to be a straightforward post and beam structure. But its lightness belies its real load bearing capacity. A hidden steel channel is the actual ridge beam attached to vertical members to close the loop, and transmitting the lateral forces to the ground. Dorman’s post and beam aesthetic is optimized through a concealed element that affords a column free space in the interiors. Between the generous spacing of the posts and the tapering of the beams supporting a low-pitched gable roof, the interiors glow as they are flooded with luminous indirect light.

The eye travels unencumbered the full length of the ceilings, which invariably feature meaningful terminations at their vanishing points. While the house retains a markedly distinct architectural identity, visitors will likely sense in this space familiar resonances in the design aesthetic. The names of Smith & Williams, Cliff May, and Buff Straub & Hensman come to mind in revisiting my own experience of this house. Furthermore, clear echoes of oriental architecture are readily legible both in the relationship of the enclosing walls to their overhangs and in the tactful drainage of the rainwater through chains discharging in the pond, a well-known technological detail in Japanese vernacular construction.

This is a place to reflect. Each design decision reinforces that notion. The innumerable touches are unfailing in that commitment. For example, linear diffusers are flush with the ceiling planking and retain the same spacing of the individual wood elements; radiant heating releases the building edge from unnecessary (and unsightly equipment) close to the glass line; the panelized glass walls literally disappear as they slide into one position, a detail which is repeated throughout the house; all openings slide, whether indoor or outdoor, and most importantly whether it is a prominent space or a utilitarian one. Connecting to nature is the leitmotiv of this project, where architecture subtly relinquishes its material presence to the surroundings. The indoor outdoor refrain is now common parlance when talking about modern architecture in Southern California. Here, however, this concept has been developed to its richest expression. Technically the entire house can be completely opened and turned into a sleeping porch, thus extending Schindler’s intuition for its own outdoor room in his famous King’s Road house.

A great deal of care was exerted in the landscaping, dotted with spatial episodes deferential to the contours, and the larger intent to complement the linearity of the house. In taking a descending path, the first encounter is with an Incan Garden nested harmoniously in the natural setting. Meandering paths, whose curvaceous contours are reminiscent of Antoni Gaudi’s wild imagination, extend the spiritual dimension characterizing the house into the surroundings. Conservation awareness suggested the utilization of broken terrazzo and concrete gleaned from the demolition of the various house changes to form garden walls along the paths which define areas where to place a chair and become part of nature.

Mr. Renard reminds me that his house was the result of actual group effort: a collective of gifted professionals steered by his untiring search for distinction, and determination that each design move build on the previous. While it might sound cliché to bring up collaboration in the context of any building process, this is the one instance where conception and execution took place through teamwork, with many making discreet contributions to bring the place to where it is today. It is my contention that there is correlation and causation between architecture and longevity. Regretfully, empirical data, and longitudinal investigations to support such a statement is still lacking. But if I were to propose a series of case studies to prove my hypothesis, I would put this house on top of the list as a likely candidate to study.