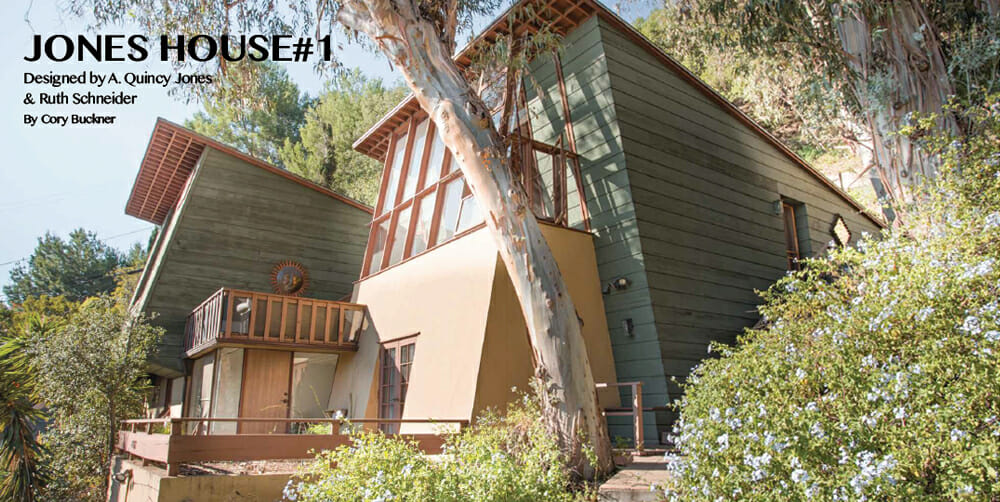 Designed by A. Quincy Jones and Ruth Schneider

In 1936, A. Quincy Jones relocated from Seattle to Los Angeles with his girlfriend and fellow student Ruth Schneider, seeking out the mecca of experimental modern architecture. At the University of Washington, Jones and Schneider, as well as fellow students Minoru Yamasaki and Roland Terry, had been greatly influenced by their professor Lionel Pries, a skilled artist and architect. Several students boarded at the Pries house, including Jones, where weekly soirees were held to discuss books or to listen to Pries regaling the group with stories of his worldly travels. While teaching the Beaux-Arts approach to architecture for the first two years, Pries also encouraged students to respond to emerging, experimental vocabularies in architecture as long as they followed the basic foundation course. The remaining three years students were encouraged to be creative, expressing each problem on their own terms. This unique education produced some of the finest modern architects of the time.

Not only the climate in Southern California but also the progressive political thought created a stimulating atmosphere for a young population of architects eager to experiment in materials and forms. Irving Gill’s 1916 Dodge House, Frank Lloyd Wright’s Barnsdale House, several of Richard Neutra’s houses including his own VDL House, and Rudolf Schindler’s King’s Road, Lovell Beach and the Howe House, were all standing when Jones and Schneider arrived. One can only imagine the excitement of seeing these structures, newly constructed, all different in their expression of modern architecture.

Schneider and Jones married in 1937 and soon both landed jobs as interns to architects; Jones worked first for Douglas Honnald from 1936 to 1937 and Schneider and Jones worked for Burton A. Schutt from 1937 to 1939. Both architecture firms were highly regarded as modernist design firms. This creative atmosphere soon filled Jones and Schneider with a desire to express their own design skills and build a house of their own. After a brief search, the couple found a lot within their budget but also considered unbuildable. Located in Laurel Canyon on the southeastern slope of Lookout Mountain, the steep lot presented a challenge but the architects were not deterred. Jones and Schneider spent hours designing their dream house while obtaining the soils reports needed to prove the property buildable. The architects came up with a practical plan to afford the construction since their meager $35-per-week salary was hardly conducive for creating a grand residence. They conceived of two structures side-by-side, separated by several feet but sharing a large deck, one of which would serve as a rental property and the other as their home.

Carved out of the hillside, the structures rise out of the ground on a base of concrete, which supports both structures and contains the garage on one side. The upper floors seem to float off the base with two very distinct structures faced in redwood with walls of glass. One structure cants forward at the top and the other originally canted in the opposite direction, creating an active dialog between the two. The panoramic view east toward Los Angeles is the focal point of both the rental unit and the house structure.

The influence of Japanese architecture is apparent in the use of the horizontal wood siding and the way the structure blends into the hillside. Jones was influenced by Japanese architecture at a very early age during years spent on his grandparent’s farm, which neighbored the Kobata Nursery. The Kobatas were a close-knit family with an acute attention to detail and a drive for excellence. This was Jones’ first introduction into the Japanese sensibility that was to influence him throughout his career. Jones and Schneider selected a hewn timber to act as the support post at both staircase areas recalling an element often seen in traditional Japanese architecture.

Building two separate structures proved ideal in a way the two would not have been able to imagine. Both Jones and Schneider sat for the architecture exams in 1942. Jones passed and received his certification but Schneider did not. The marriage was not able to survive this unequal standing and ended the same year as Jones’ certification. It was also the same year Jones entered military service and served as a lieutenant commander in the Pacific on the aircraft carrier Lexington.

Jones married Anne Bruce Austin in 1943. While in the service, Jones designed the remodel of the Laurel Canyon structures. The structure to the south, which served as the rental property, became his office with several drafting stations for future employees. The over-scaled brick fireplace in the rental unit became part of the drafting room. At the same time, the other structure to the north was remodeled. The deck at the front of the house was incorporated into the living area. The dramatic bookcase that reflects the same angle of the canted exterior wall hides the structural support. The original glass wall was removed and a window wall added inline with the canted form creating a dramatic view window to the city lights beyond. Canted glass became an element in many of Jones’ future designs since angled glass will not reflect the interior space at night as vertical glass does, freeing the eye to see the nightscape beyond the perimeter.

As Elaine Sewell Jones, Jones’ third wife, liked to recall, Jones opened his office the day of his discharge from the Navy and had his first client by the end of the day. That was to be the beginning of a productive career that spanned thirty-four years until his death in 1979. There are many features in the Jones House #1 that were springboards for elements seen throughout Jones career. The roof rafters at sixteen feet-on-center run the length of the sloping roof and are left exposed. This was the beginning of Jones interest in exposing building structure and material. The later housing projects he designed typically have exposed post-and-beam structures and exposed finish materials. Since a certain amount of blocking between rafters was necessary and the designers felt that most ceilings were too dull, they devised a richly painted egg-crate effect for the rafters and blocking, which carries through to the outside overhangs. It was Jones’ first coffered ceiling, an element he would use many times during his career. Jones used this element for his second house with Anne, the Jones House #2, a steel house built in the Crestwood Hills area of Los Angeles. The egg crate construction made of wood is used as a skylight area, creating a warm juxtaposition with the steel construction.

Often turning the egg-crate on its side to create a screen, Jones used this element on the Nordlinger Residence #1, Palm Springs Town and Country Restaurant in Palm Springs, and the Bel Air Garden Apartments. It’s interesting to note that the client, Nina Anderton, owner of the Bel Air Gardens, was also the person from which Jones bought the Nash Drive lot. That initial purchase became a profitable one for Jones, leading to commissions including several additions to the Anderton home in Los Angeles, a confectionary shop in Santa Monica, and several referrals with Anderton’s friends.The egg-crate idea morphed into the waffle design or the air-distribution flow system that Jones developed with a grant from the Public Health Research (HEW) to present to hospitals. He believed this system would provide a clean and efficient way to accommodate change, something mandatory in a hospital environment. The system of floor ducts makes it possible to punch into the concrete flooring to reach vaults running in eight directions. Lines for utilities or communications can be inserted and run in any of the directions.

The air-floor system eliminated the need for dropped ceilings to conceal mechanical runs and reduce the typical floor-to-floor height. While the system was not adopted for hospitals, Jones did implement it with the Annenberg School of Communication at the University of Southern California and the Graduate Research Library at the University of Hawaii, Manoa Campus, Honolulu, allowing the user to make changes in the sub-floor connections for media equipment or utilities.

The sofa Jones designed for the living portion of the Jones House #1 expressed Jones interest in built-ins. Part of the modernist aesthetic was to keep furniture to a minimum, easily achieved with built-ins, which Jones designed throughout his career. One sofa unit removed from one of Jones’ designs is currently owned by the Los Angeles Museum of Art.

When put into the context of other modern residential structures designed in the late thirties, the Jones House #1 stands as a completely unique structure. The two architects do not appear to have been influenced by current styles but chose to design to their own program and to address the site specifically. Their creative solution is to be admired and respected. It is a small structure with a large vision.