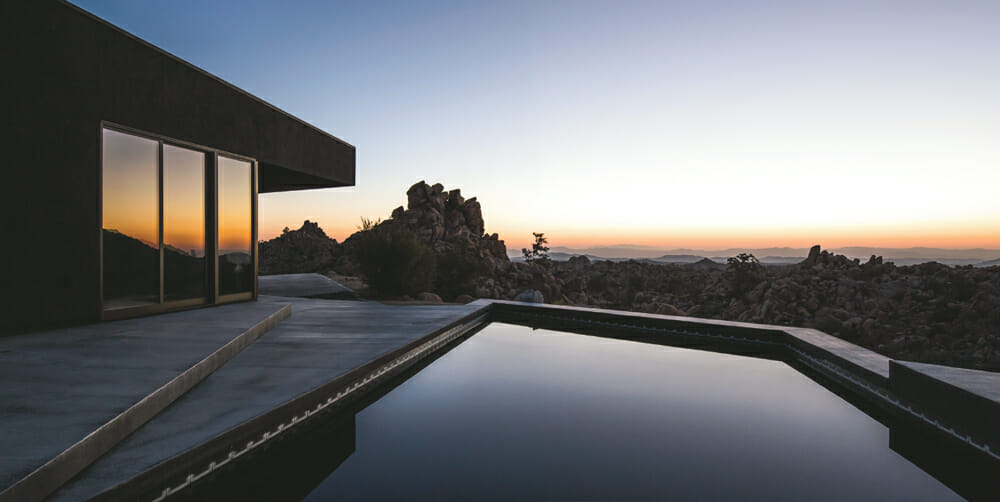 In 2008, I had the idea to search for a parcel of land in the high desert near the town of Joshua Tree, California, on which I could create a completely unique and radical hideaway. The contrast between the unspoiled, almost prehistoric landscape of the area and an avant-garde 21st century structure appealed to me.

During my hunt for an appropriate plot, I met a real estate agent who spoke of a magical spot she knew of but which was not for sale. As soon as I saw the site, which had spectacular views for miles in every direction, every other possible piece of land was ruined for me. Unbeknownst to my wife, I drove back there, contacted the owner and convinced him that he absolutely needed to sell. A few months later, it was ours. Needless to say, my wife was a bit stunned when I informed her.

That was when the fun started. There was no water or sewer system and the electrical grid needed to be extended to the site. Between finding a spot to dig a well deep enough to provide sufficient water, installing a septic system at the correct distance from not only our well but one on an adjoining property, and the legal requirements for providing access for fire trucks and equipment (which needed to be able to turn around on the property), the logistics of the construction were a true brainteaser.

In a lucky twist of fate, I met a wonderful local general contractor, Avian Rogers, who specialized in contemporary construction and poured concrete. She introduced me to the young architectural firm of Oller & Pejic. I now had an innovative and resourceful team to turn my dream project into a reality!

My concept for the Black Desert House was that I wanted it to be like the shadow of a house. I refused the typical terra-cotta pueblo style or sand-colored Mediterranean, both of which I find particularly dreadful. This house could be a glass and concrete wedge, perched overlooking the valley like a stealth bomber ready for takeoff. Each room would be oriented to take advantage of the surrounding beauty which is ever changing in shade, color and light as the sun shifts westward during the day. I decided that the corners of the living spaces would consist only of obtuse angles to emphasize the streamlined, aggressive & severe geometry of the structure.

This project took 5 years of blood, sweat and tears to complete. My furnishing choices ran the gamut from unusual ‘70s designs to 18th century heirlooms to contemporary masterpieces like the facetted Konstantin Grcic bar stools in the kitchen and the Ingo Maurer chandelier in the dining room on which friends & guests who stay in the house write mementos or draw. The ubiquitous black background contrasts with sporadic flashes of vibrant color.

Only an 8 minute drive from the closest town, the Black Desert House feels like it is at the end of the universe, with a silent serenity that is almost spiritual. As soon as I arrive there, my heartbeat slows and all worries and stress disappear. There is no need for technological distraction; contemplating the distant mountains and rock formations for hours is an experience as soothing as meditation.

Oller & Pejic Architecture is a husband and wife architecture partnership located in the Echo Park neighborhood of Los Angeles.

The desert house project began in fall of 2008. The first meeting with the client produced a brief but compelling instruction: to build a house like a shadow. This had a very specific relevance to the high desert where the sunlight is often so bright that the eye’s only resting place is the shadows.

The site had been roughly graded in the 1960s. A flat pad had been created by flattening several rock outcroppings. The pad is located at the end of a driveway on a rock outcropping with almost 360 degree views to the horizon and a large boulder blocking views back to the road.

Looking back at precedents for building on similar sites the architects side-stepped the rusty desert modern mid-century routes and looked back to the seminal works of Frank Lloyd Wright namely the Pauson house of 1939 and the Fawcett House for grounding in vast spaces. With the contemporary art movement of Land Art as a starting point, the house would conceptually replace the missing mountain that was scraped away with a shadow or negative of the rock; what was found once the rock was removed, a hard glinting obsidian shard.

The layout of the house was inspired traversing the site outside. The rooms are arranged in a linear sequence from living room to bedrooms, all at varying levels wrapping around an inner courtyard which adds a crucial intermediate space in the entry sequence and a protected exterior space in the harsh climate. The living room was summed up succinctly by the client as a chic sleeping bag. The space, recessed into the hillside with a solid earthen wall to lean your back against as you survey the horizon is a literal campsite which finds its precedent in the smoke blackened native cliff dwellings of the Southwest.

The dark color of the house interior adds to the primordial cave-like feeling. During the day, the interior of the house recedes and the views are more pronounced. At night the house completely dematerializes and the muted lighting and stars outside blend to form a seamless backdrop.

The dark exterior color was a given from the start and allows the house to visually recede in the landscape. The color doesn’t affect the thermal performance of the house, as a high percentage of the exterior wall is high performance glazing to begin, and in the summer months the majority of sun hits the roof which is white. The walls are framed with thicker 2×6 framing members and the house is insulated with sprayed-foam insulation which prevents heat from migrating to the inside of house. At the elevation the house is located, the nights are generally very cool and there is typically snow in the winter.