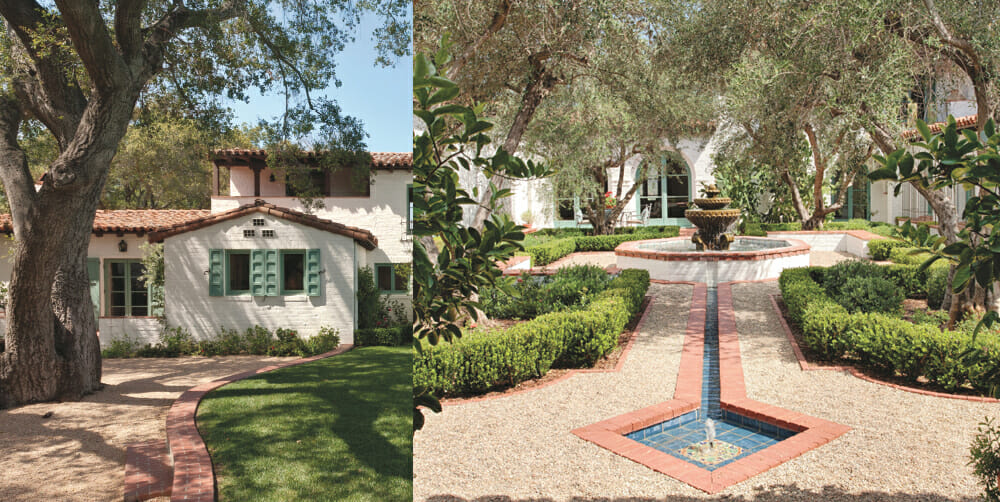 Many houses evoke personal memories for current or former inhabitants. Some great houses, if they are recognized and preserved, become part of our collective memory for cultural and historical reasons. The William Ford house in Ojai, California, designed by Paul Revere Williams in 1929, is remarkable for its client, for its excellent design by a historically important architect, and for its role in the history of Ojai. A recent restoration by the current owners should make this piece of Southern California’s architectural history even better known.

William B. Ford (1873-1934) was a cousin of the automobile manufacturer, Henry Ford, and an executive with the Edward Ford Glass Company in Toledo, Ohio. He had close ties to Edward Drummond Libbey (1854-1925), an important figure in Ojai’s history. Libbey, the owner of the Libbey Glass Company in Toledo and founder of the Toledo Museum of Art, fell in love with the Ojai Valley on a visit in 1908. Libbey and his wife commissioned Myron Hunt in 1910 to design their winter home in Ojai. [Fig.1]

The town had been laid out in 1874 by a developer named R. G. Surdam and called Nordhoff until 1921, presumably after Charles Nordhoff, who wrote “California: For Health, Pleasure and Residence” (1873). After fires in 1916 and 1917 destroyed most of the wooden buildings of the town, the popular story is that Libbey was largely responsible for selecting the architects, Mead and Requa, and financing the rebuilding, though there are indications that Mead and Requa were working on a plan for the plan as early as 1912-1913. The downtown arcade, bell tower, and other Spanish revival buildings that give present-day Ojai its Spanish Colonial Revival character are at least partly the result of Libbey’s vision for Ojai and his support. In 1921 the city was incorporated and renamed Ojai. Surrounded by mountains, the Ojai Valley is 10 miles long and 3 miles wide, just northeast of Los Angeles and east of Santa Barbara. Libbey promoted the charms of the area to his friends and colleagues, among them the Los Angeles oilman and mining engineer, Irving Augur and Libbey’s fellow Ohioan, William B. Ford. (Ford’s glass company merged with Libbey’s in 1930, after Libbey’s death, to form Libbey-Owens-Ford.) Augur and Ford brought their families to Ojai and each commissioned the Los Angeles architect Paul Revere Williams to design a winter home.

The Ojai Country Club Estates subdivision was developed in 1926 on sixty acres adjacent to the Ojai Country Club, originally designed in 1923 by Pasadena architect Wallace Neff and now part of the Ojai Valley Inn. The development of this area testifies to its popularity among wealthy visitors from the East and Midwest who escaped to California in the winters. William Ford purchased 10 acres in the Ojai Country Club Estates in 1928 and the house he commissioned from Paul R. Willliams is reported to be one of the first to be built in the subdivision. Williams placed the house on a gentle rise that still gives expansive views over the valley. Originally the Ford holdings included a tennis court and acres of mature orchards and oaks. Today the site comprises over 3 acres.

Paul Revere Williams (1894-1980) earned his architecture license in 1921, after studying at the University of Southern California. He is known today for his many elegant homes for Hollywood celebrities, who prized his skill at designing in historical styles. Williams also created some of L.A.’s significant modern structures of the 1950s and 1960s: schools, public housing, and commercial buildings.

He was part of the team that worked on the Los Angeles International Airport and was well connected in the profession until his retirement in 1973. In addition to his many works, however, Williams holds a special place in the history of Southern California as one of the nation’s most successful African-American architects. How did Ford come to select Williams as his architect? For many historical buildings this is an intriguing but unanswerable question.

There are, however, several plausible links between Williams and Ford. Paul Williams had previously designed a Spanish Colonial Revival house for James Riley in Ojai in 1926-1927. Riley was an investment banker in the Los Angeles firm of Drake, Riley and Thomas. What oilmen need, is investors and Irving Van Aken Augur (1886-1930), the Los Angeles friend of Libbey and of Ford, was the founder of the Bolsa Chico Oil Company and no doubt knew Riley. Augur had, along with Ford and Riley, succumbed to the charms of Ojai. After completing James Riley’s house in 1927, Williams designed an Ojai estate (house, caretak er ’s cottage, and stables) for Augur in 1929, at the same time that he was working on the Ford estate. Libbey or Riley may have connected all these successful businessmen.

The Spanish Colonial Revival style was popular in the 1920s and Williams designed several houses in this idiom through the first decade of his practice. His Baird/Stewart/Garza house of 1926 in Glendale and the Riley, Augur and Ford houses in Ojai show his mastery of the details of the style. His use of the Spanish Colonial Revival, however, differed from Cliff May’s deliberately rough gestures that mimicked vernacular adobe and wooden ranch buildings. Williams’s use of historical styles, Spanish revival, Georgian, or English Tudor, was always refined. His Beaux-Art based training showed in the clarity of his proportions and details. Cliff May was a romantic scene-maker; Williams was a trained architect who became skilled at using his knowledge of historicist styles to enhance the lives of his many wealthy celebrity clients. Williams’s reserved handling of the Spanish Revival style, which, like George Washington Smith’s best designs, took inspiration from the modest Andalusian farmhouse, was perfect for an upper-class Midwestern businessman, such as Ford.

For the Ford house, Williams used concrete block, to resemble adobe brick but with a cleaner line, and lath-and-plaster painted white to create a hacienda style structure of one- and two-story volumes, roofed with red tiles. Simple wood shutters are painted robin’s egg blue. The refinement of Williams’s design is especially evident in the scale and proportions of the house. On approaching the residence, the driveway and parking for guests is neatly separated from a more private, secluded driveway for use by the family and staff. The front façade is elegant and reserved. It gives no clue to the actual size of the structure, which is quite large with sixteen rooms, including eight bedrooms and 8 bathrooms, a library, large butler’s pantry and larger kitchen, in 8,000 square feet.

Williams appreciated and made the most of entrances, saying, “Probably the most important room to consider from a standpoint of décor is the entrance hall—this is the area that speaks out the welcome.” (Hudson, 70) As is typical of the style, the entrance hall opens onto a large, light-filled loggia that provides views to a garden through arched glass doors and windows, and leads to dining, kitchen, and servant rooms to one side, and to the living room, library, and stairwell to bedrooms on the other. The many rooms unfold, one after the other, and on and on if one is lucky enough to tour the entire house. Despite the size, the house is not pretentious. The rooms are beautifully scaled: ample but not oversized and each is made graciously individual with fine detailing. Williams did not hesitate to include modern conveniences, such as large wood-framed pocket doors that slide into the walls to create clean, unfussy openings from the living room to the central courtyard. Pull-down brass screens roll up into discrete housings on the windows and doors. He also employed fine woodwork in the ceilings and in the mahogany-paneled library. Exquisite plasterwork mimics wood in one ceiling, creates gentle curves in another.

The central courtyard is completely enclosed by the first floor volumes of the house and the attached garage. At one end a loggia-framed seating area includes a fireplace (one of five in the house); at the other end a graceful staircase leads to guest bedrooms. The current owners refurbished the courtyard that was puzzlingly empty when they acquired the house. It now includes plantings around a tiled fountain and brick-lined rill. The white-painted brick columns of the rounded arches in the courtyard are decorated with flushed dentiled capitals, which produce subtle decorative patterns of light and shade. Many of the rooms open to or look out on the courtyard or other terrace or balcony.

Custom tile is used throughout the house. The kitchen is entirely clad in yellow tile that covers the walls and ceiling, for ease of cleaning. Every bathroom has its own distinctive decorative tile, laid in a ribbon-like row that encircles the room. Each bedroom has multiple windows that can be opened to bring in healthy night air, in keeping with the thinking of the time and the concern about tuberculosis. The larger bedrooms have sleeping porches, which extend the rooms with multiple large windows on three walls, to allow cross ventilation.

Not surprisingly, large panes of glass are used everywhere in the house, lending a clean and surprisingly modern look that speaks to the wealth of the client and advertises the Ford family business. Glass panes were expensive to produce until after World War II. Williams’s modernity shows throughout the house. Despite the decorative elements common to the Spanish revival style—red tile on the roof, balconies with wrought iron, arches and decorative tile— the composition of the house, inside and out, is refined rather than exotic. One of the best views from which to admire Williams’s skill is the rear façade, which faces the swimming pool, designed by Williams with simple curved ends. The multiple volumes of the large house are beautifully juxtaposed in a balance of scale, color, and texture.

William Ford died in 1934, five years after the house was completed. Mrs. Ford and the children moved to a family-owned ranch in Montana shortly after. Subsequently the house suffered neglect for many years but fortunately no remodeling marred the original structure. The current renovation, which took about four years, has justly earned the house landmark status as Ventura County Cultural Heritage Landmark no.169.