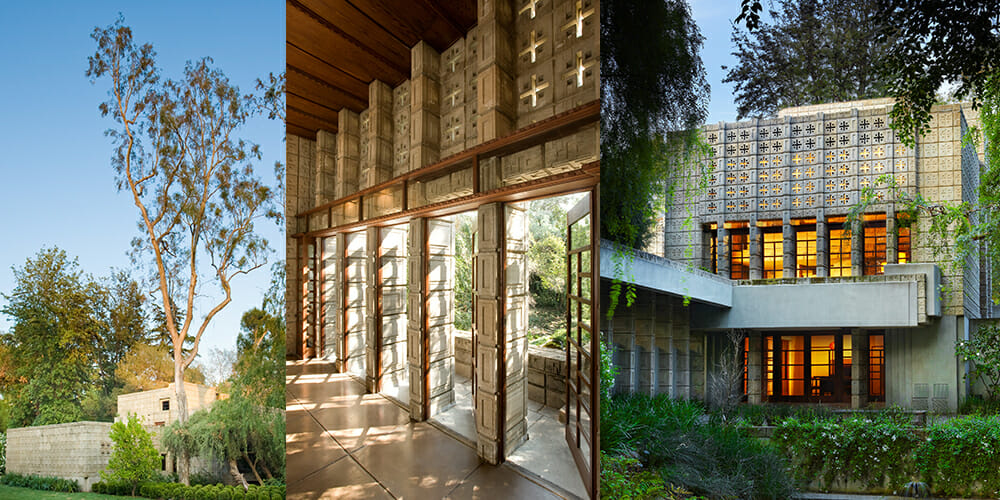 In the 1920s, Frank Lloyd Wright designed four textile block houses in Los Angeles and, according to Henry Russell Hitchcock, the 1923 Millard residence is the best. Hitchcock was the preeminent architectural historian of his day and organized the landmark exhibition Modern Architecture at the Museum of Modern Art in 1932. He placed Wright first and foremost in the exhibition and the catalogue noting that it was Wright who conceived of such modernist principles as the open plan, the flat roof, the organic relationship between building and landscape and, most important in L.A., the indoor to outdoor lifestyle. His ideas influenced countless European and American architects including his sometime associates Rudolph Schindler, Richard Neutra and John Lautner.

Wright was in the midst of another burst of exceptional creativity when he was approached about the Millard residence, also known as La Miniatura. In 1906, he had designed a house for rare book dealers George and Alice Millard in the Highland Park neighborhood of Chicago. They moved to South Pasadena in 1913 and, after the death of her husband, Alice Millard expanded the business to sell European antiques. [1]

Wright had completed the Hollyhock House in Hollywood for the oil heiress Aline Barnsdall as well as the Imperial Hotel in Tokyo. Both projects employed successfully the use of patterned concrete blocks. When approached by Millard, he suggested a further evolution of his block technique. It turned out to be the most romantic of all the houses. David Gebhardt wrote, “The dwellings location, within a low ravine, enshrouded by trees, and overlooking a pond with a path of stepping stones across it, created a highly potent poetic image, similar to that of Falling Water poised over its waterfall at Bear Run, Pennsylvania. (1936)”[2]

Millard was content with the concrete block if she could contribute her own taste to the house in the form of an ornate fire screen in the living room, rustic wooden doors and 18th century Delft tile in the bathrooms. Wright was so excited about his sympathetic client and the charming site that he reduced his fee to accommodate her budget. Millard had purchased the land on Prospect Crescent near many other residences designed by distinguished architects including Charles and Henry Greene, Wallace Neff and Myron Hunt. Wright positioned the house within the embrace of a natural arroyo so that the living room elevation opens onto an oval pond and lush gardens.

Though most of Wright’s early buildings were oriented horizontally to relate to the horizon of the mid-west, the Millard house is distinctly vertical, with columns of block reinforcing the upward movement, in response to the shape of the ravine in which it sits.

A filtered, dappled light flows into the house through perforated block walls that act as screens as well as numerous tall windows. The pattern cut into or stamped onto the block was drawn from Pre-Columbian motifs and modernized as a cross surrounded by four holes. Wright mixed sand from the site into the cement so the building would be authentically integrated with its location. [3]

The three levels of the house spiral around a central chimney, a choreography that ensures one is in touch constantly with the palpable presence of nature through windows, terraces and glass doors.

From a paved courtyard, one enters at the middle level, under a bridge that connects the main building and garage, and experiences an extravagant sense of release coming into the double height living room. On one side of the room, a wall of glass doors is surmounted by a screen of perforated block that filters the verdant light coming into the room. On the opposite wall, patterned block ornaments the fireplace and façade of a balcony that conceals access to the top floor.

Redwood ceilings and paneling lend warmth to the concealed stairs and corridor leading to the master bedroom, which features high ceilings and a tall, slender window framing the view of the arroyo. Several roof terraces are meant to be used as outdoor rooms offering views of the lawns and mature trees on the property.

On the lower level, the original kitchen has been updated with contemporary appliances. It is adjacent to the dining room that opens onto a patio and garden.

A few years after its completion, Millard asked Wright to design a smaller, separate book studio and guest house adjacent to the house. The commission was given to his son Lloyd Wright who concentrated the ornamental block around doors and the windows. A sleeping porch on the mezzanine opens to the double height ceilings of the main studio. The perforated block screens light as it does in the main house. Lloyd Wright subsequently designed the landscaping for the entire property.

Wright was exceptionally pleased with La Miniatura. In his autobiography, he wrote, “The whole mass and texture of the home made the eucalyptus trees more beautiful, they in turn made the house walls more so.” [4]

Airmail.news: Save This Masterpiece from the Tech Bros

Architectural Digest: A Frank Lloyd Wright–Designed Home is For Sale in an Unlikely Location