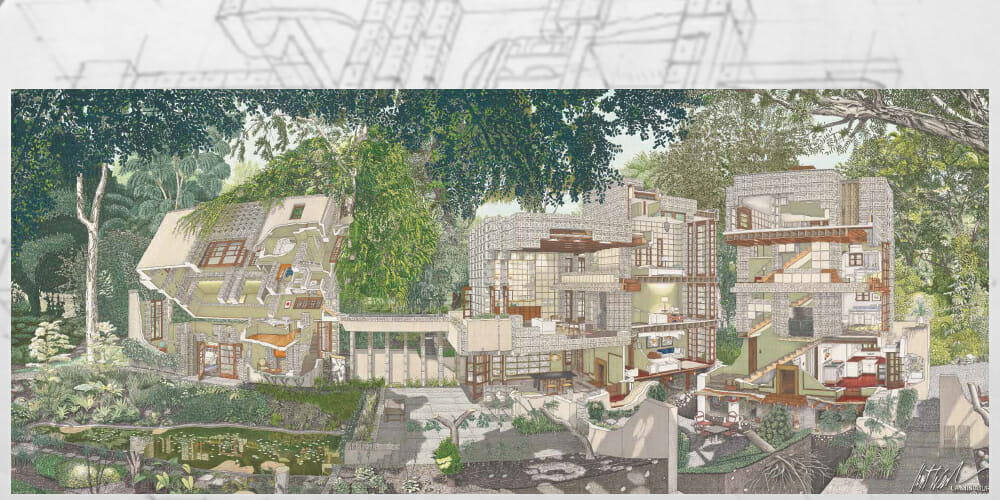 The Millard House On The Market

Having grown up an architecture buff up in Los Angeles, the Millard House in Pasadena has always been hidden behind a screen of verdant growth and unapproachability. Consulting architecture books doesn’t really reveal the flow of the space, or how the Studio connects. Photographs – for all their beauty – never quite tell me everything I want to know. Somehow, I developed this format of architectural representation which satisfies my craving to understand the design of a building more fully.

Working from pictures in books, I did produce a preliminary drawing of the Millard House in black and white, which, looking at it now, is so hilariously wrong. Whatever wasn’t covered in the published photos forced me to make a guess which usually turned out to be wrong. “Never try to outguess Mr. Wright” became my motto. To produce a drawing like this, one must visit the building in person. But how? La Miniatura is almost never opened to the public.

Logically, therefore, I bought a nineteenth century wooden house in a West Indian port town. Really. I was alone. In my early thirties. I had absolutely no business doing this. I knew nothing. A room of one’s own? Fine. Sure. Got it. Yup. But a large hundred year old house on a West Indian island no one had ever heard of? And, to make matters worse, I already had a house of my own, a perfectly lovely 1920’s hacienda in the Hollywood Hills right under the “H.” What was I doing here? In this Quarterly devoted to architectural masterpieces, I suppose someone has to make the case for architectural madness. I fell in love with a house. I wanted to live in that house. Period. It’s been the longest relationship of my life.

But when this masterpiece from Frank Lloyd Wright’s “middle” period was placed on the market some time ago, I contacted the listing agent, begging for a chance to make my drawing, saying that I wanted to know more about the design of this concrete tower in a ravine. Surprisingly, the agent said “Yes.”
When I visit a building, I want to record everything. I can’t get enough data: How is it sited? How does the sunlight strike it? How many books are in the bookcases? Are there bookcases? I am only limited by what I can observe and record. As an artist, my challenge is to try to be a step ahead of technology; to do something a computer can’t. This drawing and others like it that I have completed are all done strictly freehand—I don’t even use a ruler.

I have run into people who say, “Why go through all this trouble? I have a program that could scan in a building like this in 40 minutes.” Sure you do.

La Miniatura presented me with a challenge in that there is such a subtle interplay between the building and the site, the lush landscaping, the reflecting pond. I always try to capture this relationship. However, for my own sanity, I have to separate the two elements. I prepare a pencil drawing of the building itself, and then, a separate pencil for all the landscaping.

I work with a light table, which allows me to trace my pencil image in black ink onto my render paper. Objects that are in front go in first, hence, all the shrubs and the canopy of leaves along the top. I color everything in with marking pens. It’s like the world’s most elaborate coloring book. Once the foreground is in, then the building goes in, and finally, the landscaping in the background. Pen and ink allows for no mistakes. I make them anyway, but you try to hide them! People always ask how long does it take. I have no idea. Capturing the subject to the best of my ability is the goal. I am mindful of the time involved, but I blithely ignore it. It takes what it takes.

The original is 5 feet across. Standing before it, one can move closer and only look at certain parts with no loss of detail—viewers are always finding new things to see. Just about every space is included. I was only sorry I couldn’t work in the garages, as they are on the opposite side of the building. The finished drawing becomes a fantastic memory piece for both buyer and seller, which really makes it a good deal easier to let a beloved property change hands.

My process begins by collecting as much data from the building as possible. Fortunately for me, the Millard House is made of 16-inch concrete tiles, so taking measurements was not necessary. You just look at it to realize that 3 tiles equals 4 feet and so on. I also take as many digital photographs of the exterior as I can with the sun more-or-less in the same place. Then, I shoot pictures of every nook and cranny of the interior. On this one, I took over 700 pictures. It’s giddy fun, since none of the pictures really are all that great—they’re all dark and blurry—you couldn’t possibly run them in a magazine like this one. But I only need a record of what is where.

While visiting the building, I rush about like a madman. But later in my studio, I focus myself and come up with the “pose”; how do I show the relationships and the inner workings and still have it look like the complete building? To me, an especially critical element was to reveal the sets of stairs which circulate around the fireplace. I love doing staircases, the more elaborate, the better. Opening up the house vertically like a steamer trunk helped to show this detail, but also had the added attraction of showing what I know everybody wants to see: what do the bathrooms and kitchen look like? Everyone wants to know what the bathrooms in a Frank Lloyd Wright house look like.

Once I have decided how best to present the building, one could ask, “Where on earth do you start?” My method for dealing with such a complex series of shapes is simple: I throw a grid over it. Length, breadth and width. This results in sort of a “cage” of rows and columns: this building fits into this cage. Draw the cage in the pose you want, then all I have to do is draw what is in each cube, and persevere to the end! I actually learned this technique from looking at some drawings Wright did of the Ennis House. An “Ah-Ha!” moment indeed. I think the most challenging portion to do was the seen-from-below kitchen in the studio—a small space, lots going on, and I wanted to look at it from underneath! A brain-teaser, for sure.