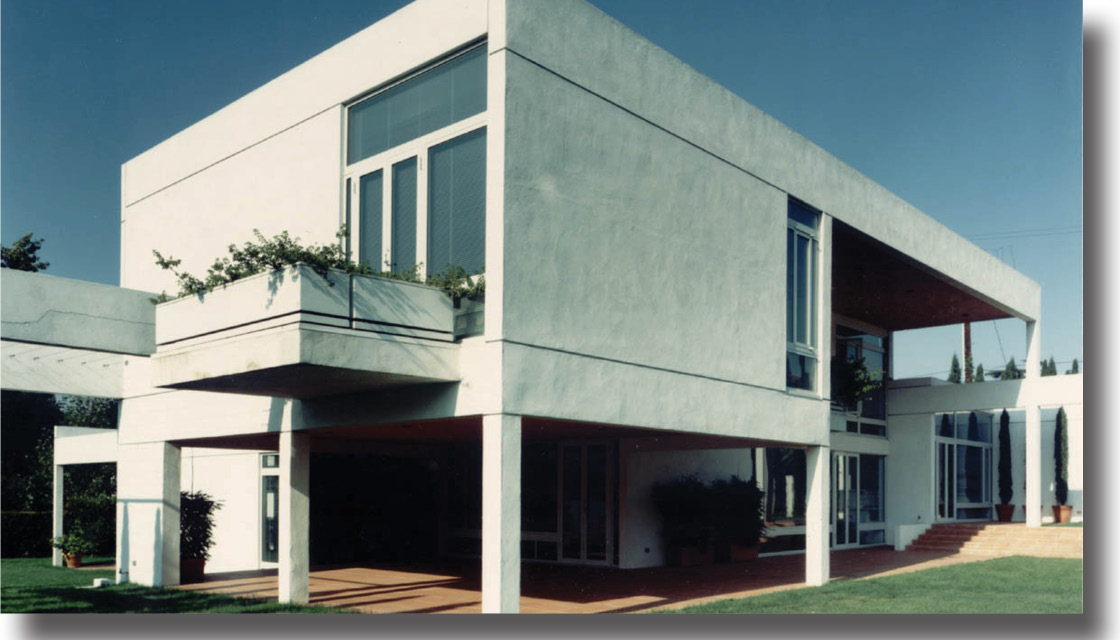 LA Residential by John Arlidge of The Sunday Times.Whoopi Goldberg has one. So do Courteney Cox and Tom Ford, former creative director of Gucci. Leonardo DiCaprio was going to buy one but the Hollywood screenwriter Mitch Glazer outbid him. Orlando Bloom is searching for one. Rene Zellweger has just agreed to sell hers.

For the bold and the beautiful of Los Angeles, architectural collections now rival couture wardrobes. With stars choosing homes the way they select their clothes, the hottest property labels to drop in pool-party conversations are Frank Lloyd Wright, Richard Neutra and John Lautner the men behind the modernist icons of California.

The frenzy for designer homes has been dubbed the brand-name property game. For players, a Spanish-style villa or mock-Tudor English mansion in Beverly Hills is so yesterday. Today, the must-have look is mid-century modern. Blue-chip residential homes by the great LA architects have never been more highly prized, says Crosby Doe, who specializes in selling the city’s architectural icons. Homes are harder to get than an invitation to the Vanity Fair Oscar-night party.

Most of Crosby Doe’s customers are Hollywood producers, directors and actors because they are people who see things visually, says Doe. As well as Goldberg, Cox and DiCaprio, the firm has had dealings with Madonna and Guy Ritchie, Pop Idol’s Mr. Nasty, Simon Cowell, Diane Keaton and Joel Silver, producer of The Matrix.

In a city where the new is prized over the old tear down and start afresh’ is the motto of many wealthy Angelenos ‘ what is driving the new fashion for the past. “Times and tastes are changing,” says Doe as he stands next to the zen pool at the Singleton residence, a Neutra home on Mulholland Drive, named after the prominent local family who lived there.

“People in LA used to show off their wealth by building the biggest and the most expensive properties. Today, people like to show off their refined tastes and you don’t get much more refined than living in an original Frank Lloyd Wright. People love the simple clean lines and unique combination of inside and outside space that these homes offer.”

LA has some of the best modernist homes in the world. In the 1950s architects were encouraged to design prototype homes, constructed using new technology and materials developed during the war years. Charles and Ray Eames, Eero Saarinen, Lloyd Wright and Neutra created sleek, unornamented homes that redefined residential living. In particular, they made the most of the California weather by blurring the distinction between indoor and outdoor living.

The fashion for mid-century modern homes was kicked off in the late 1960s by a Briton, Lord Palumbo. Over the next two decades he bought acclaimed houses by Le Corbusier, Mies van der Rohe and Lloyd Wright.

David Lynch, the director of the film Mulholland Drive, and a host of actors followed, snapping up properties by the dozen. The market jumped when the thriller LA Confidential was released. Many of the homes it featured notably Pierce Patchett’s whitewashed Neutra were modern icons. Fashion photographers, including Mario Testino, queued up to use the homes as backdrops for fashion shoots.
The breakthrough came when Silver revitalized Lloyd Wright’s legendary Storer House in the Hollywood Hills in a painstaking restoration that took several years. “Joel had so many house parties with so many well-known actors that the house became as well known as the people he invited,” says Doe. “When people saw how good mid-century modern homes looked and how well suited they were to California weather, everybody wanted one. The market has been crazy ever since.”

Last year Crosby Doe enjoyed sales of more than 107m. The mid-century homes they sell fetch between 25% and 200% more per square foot than properties in the same area in different styles.

Having the money to play this property game does not mean everybody knows the rules. Doe has seen too many houses modernized with improvements such as wall-to-wall carpeting. He has publicly criticized Diane Keaton’s ultra-modern interior at her Lloyd Wright home, saying it was “like taking a Ferrari and putting a Ford engine in it.” But his architectural enemy number one is Madonna. After buying John DeLario’s 1926 Hollywood Hills masterpiece, Castillo del Lago, she set about transforming it into a root-beer-red faux Florentine villa. Even worse, Doe had to see it every day; he and his wife, Linda, live in a two-storey Spanish eyrie on the same mountain top.

“She wrecked it,” says Doe. “They took the historic tiles off the roof, threw them in a dumpster and put on these Taco Bell tiles. It was one desecration after another. Criminal! These homes are classics and there are not many left. The buildings are going to be celebrated long after those people are dead and gone.”

Madonna didn’t even cash in on Castillo del Lago – once owned by 1940s gangster Bugsy Siegel. Having bought it for about $3m, she sold it three years later for the same amount despite having spent about $500,000 on it. Her next purchase, in Beverly Hills, was a house designed in the 1920s by the fashionable architect Wallace Neff. After years of soaring prices in the late 1990s, Madonna hardly covered her expenses when she sold it to the actress Jenna Elfman for about $2.5m.

In smart LA circles, Neutra and Rudolph Schindler have become as familiar as Prada and Gucci. The name on the walls has become as important as the right label in your suit or Oscar-night gown. As he stands by the pool at the Singleton residence and gazes over Bel Air, where the street lights glow orange like bushfires, Doe says the fashion for brand-name architecture is one LA fad worth following. “Living in a priceless work of art” what could be better’

Where the stars are buying

Rene Zellweger, star of the new Bridget Jones movie, recently agreed to sell her classic Paul Revere Williams house in Bel Air, which she bought for about $3.7m in 2002. It has been fully restored and comes complete with a library, gym, office and a private guesthouse. Williams (1894-1980) was considered one of the foremost architects of southern California, producing a huge number of buildings during his career, which spanned almost 60 years. He designed more than 2,000 private residences and many important buildings, including Los Angeles International airport.

Friends actress Courteney Cox has a reputation for buying and decorating houses, even producing a design show for television called Mix it Up. She studied architecture at Mount Vernon College in Washington, DC. “That’s what I wanted to be,” she once said. “I’m most interested in (architects like John) Lautner and (Richard) Neutra.” The Malibu home she shares with her husband, the actor David Arquette, was designed in 1979 by Lautner. Composed almost entirely of glass and wood, it has sweeping curves that reflect the shoreline. Cox paid $5.4m for the house in 2001.

The usually savvy Madonna is one of the rare people to lose out in the LA property market. She bought Castillo del Lago in the Hollywood Hills for about $3m in the mid-1990s and sold it for the same amount three years later, having spent about $500,000 on ‘improvements’. The roof tiles were replaced with bright terracotta tiles that made it look ‘like a Taco Bell restaurant’, according to one critic. She then bought a 1920s Wallace Neff house.

By V.L. Hendrickson One of pioneering California architect Richard Neutra’s most notable...

After more than one and a half years on the market with an asking price that was initially closely...