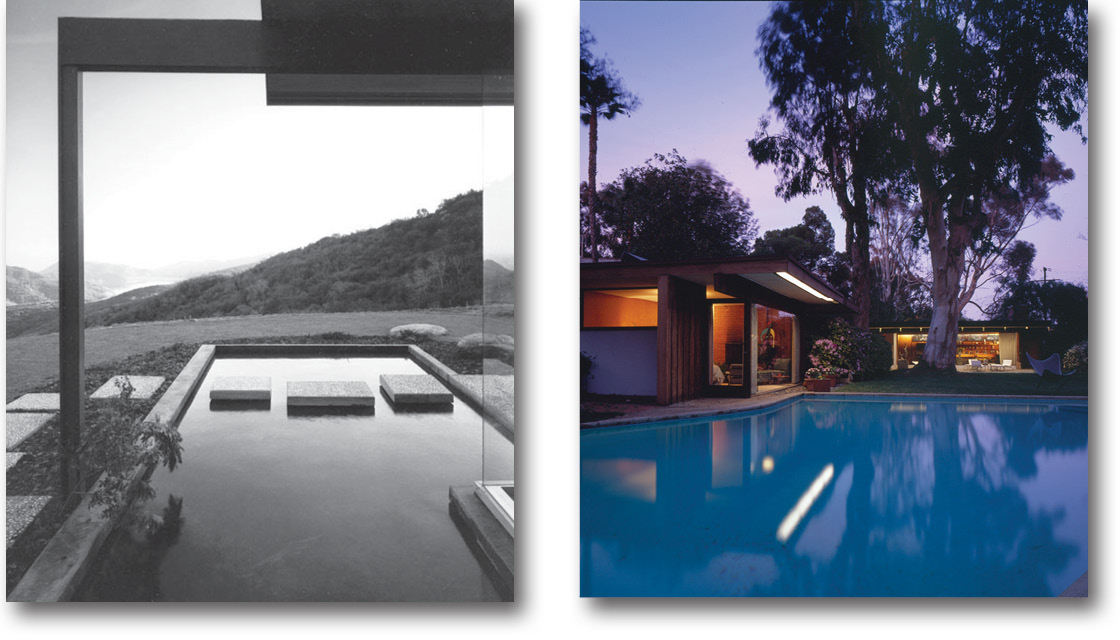 Looking for Modern? Wait in Line. by Kimberly Stevens IF you’re interested in buying a Neutra, Lautner or Schindler in Southern California – or any house designed by a high-profile architect, for that matter – be prepared to stand in line and to pay top dollar.
“It seems like there have been record-breaking sales every couple of weeks,” said Crosby Doe, an agent at Crosby Doe Associates in Beverly Hills, Calif. “If there is a name architect involved, there is an instant value attached.”

In the middle of the 20th century, modernist architects were particularly drawn to Southern California because its climate offered the ideal location for building houses that blurred the line between indoors and outdoors. Sharp lines, large expanses of glass and open floor plans abound in these houses.

They are considered small by today’s standards, and often lack the bells and whistles that homeowners have come to expect, like huge granite kitchens and master baths with double sinks and large showers and tubs. Yet these days the houses are selling for far more than similarly sized houses on comparable lots.

The premium paid for houses by modernist architects is a trend that started about 10 years ago and only continues to gain momentum. Some of the houses have tripled in price in that time. With well-known people like the fashion designer Tom Ford snapping up Neutras, the cachet only intensifies.

Mr. Doe, who has been in the real estate business for more than 30 years, has sold a number of architecturally significant properties three and four times over. He attributes the high prices to a simple supply-and-demand phenomenon and an increased appreciation of architecture.

“When you have a city of 10 million and only 3,500 properties that can be considered historically and architecturally significant, it creates a feeding frenzy,” he said. Mr. Doe said these houses fall into a completely different category from others. “It’s not just about the real estate anymore,” he said. “These homes are being viewed as pieces of art, which changes the whole market.”

Jeffrey S. Zumbo, the president of Major Appraisals in Los Angeles, also likens the process to the art market. “There’s always someone waiting in the wings that is going to take it to the next level, and you never know how high they are going to go,” he said. “There is a level of passion among this buying pool, and many of them are willing to pay anything.”

Mr. Zumbo maintains that the market for this kind of real estate has shifted significantly in the last 10 years and he now looks at these houses differently, comparing them with other houses by significant architects, to get an accurate appraisal. He said that a 1,000-square-foot Gregory Ain home recently sold for around $900,000 in Mar Vista. Right around the corner, he said, it is possible to buy a new 3,000-square-foot home for the same amount. “It is important to realize that these homes are not in the normal home category, and you have to make adjustments,” he said.

Peter Burness, an appraiser for Brentwood Property Appraisals, said that finding sales of comparable properties to make fair appraisals is very difficult. “We get really excited when an architecturally significant trophy property sells, because we have something to hang our hat on,” he said.

Three years ago, George and Dana Balkin bought the Flavin House, a home on Neutra Place in Los Angeles designed by Richard Neutra. She said they chose a Neutra house because they “didn’t want to live in a traditional house.”

“I love the architecture,” Ms. Balkin said. “It gives me peace.”

The couple paid $795,000 for the house, but now believe they could sell it for far more. Recently, a Neutra house next door sold for $1.2 million. “If we wanted to sell our house tomorrow, I think we could command a similar price,” Ms. Balkin said.

Houses by architects like Neutra are selling for twice the prices of those of similar size that lack the architectural cachet. Currently on the market is the Singleton House, designed by Neutra and completed in 1959. It overlooks Stone Canyon Reservoir in Bel Air and sits on 5.2 acres. The house has six bedrooms, five bathrooms and a small guest house. The asking price is $5.9 million, and according to Scott Klauss, an appraiser for Major Appraisals who is familiar with the property because he appraised it several years ago, the same size house on the same lot, if not designed by Neutra, would be valued at $2 million to $3 million.
“The difference in this case is the Neutra difference,” he said.

According to Mr. Doe, the broker who is handling the sale for the owner, which is M.I.T., a bid has been made for the house that is more than the asking price. Mr. Doe likens its architectural significance to Fallingwater, the Farnsworth House and Philip Johnson’s glass house. The Singleton family donated it to the school, but still retains control over who buys the house. The family has interviewed nine candidates on a quest to find a new owner who will care for and maintain the property, and appreciate its significance. Another Neutra house, the Bailey House in Pacific Palisades, with four bedrooms, two baths and 2,700 square feet on 0.8 acres, is in contract for $3.95 million.

Craig Terrien, an agent with White House Properties who runs valleymodern.com, a Web site, specializes in selling midcentury modern homes, mainly in the San Fernando Valley. He started the site to show interested buyers that there are still affordable modernist homes. But even he admits that the prices have gone up so much that affordability is a relative concept. Even houses by architects who are not as well known are selling for more than one might expect, because they are benefiting from the frenzy. Not long ago, he said, a house in the Balboa Highlands area of Grenada Hills designed by A. Quincy Jones that had 3,500 square feet and much original detail sold for $100,000 over its asking price of $650,000.

“There is a whole group of talented architects and developers that may not carry the Neutra or Schindler name,” Mr. Terrien said, “but they are reaping the benefits that come along with increased awareness of significant architecture.”
The interest in the houses, he said, reflects the style of a new generation of home buyers. “There is a real fascination with that era,” he said, “and I think people are not only buying into the architecture – they are buying into a lifestyle.”

LA Times, Home of the Week: An indoor-outdoor Neutra