Out of Castries - Crosby Doe Associates, Inc.
User registration is disabled in this website. 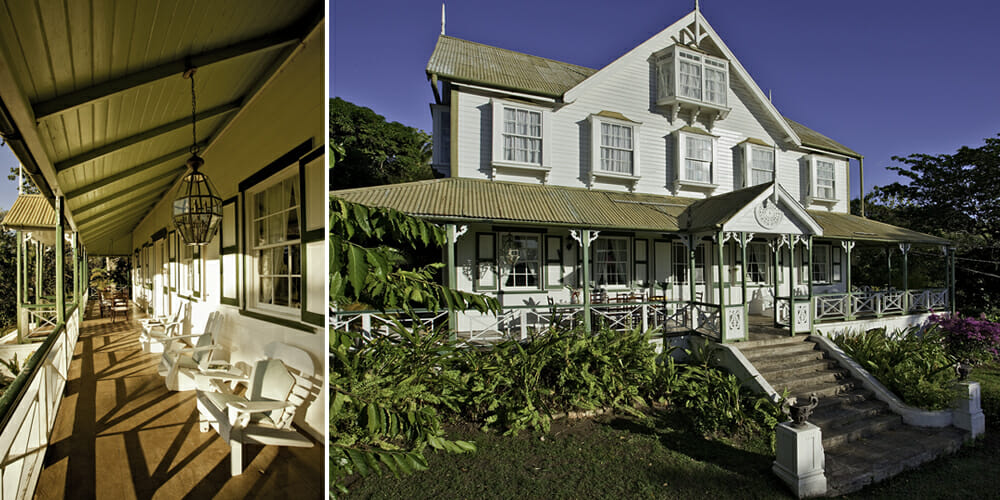 “I had a farm in Africa at the foot of the Ngong Hills.” I read that opening sentence of the great masterpiece for the first time in 1982 on a round the world trip that ended in the Eastern Caribbean on the island nation of Saint Lucia where I would spend the first night in my newly purchased historic home which the taxi driver could not find. Nor could I. It was after midnight. No cell phones. And a nation-wide power outage. A pitch dark port town. I had two suitcases; one contained two pairs of double bed sheets and some towels. Rule number one: be sure to stumble into the void with your own towels and sheets. Isak Dinesen was all the rage at the time, and it would worsen when the movie version of “Out of Africa” was released a couple years later. Of course, I’m no Karen Blixen. But soon enough I would be forced to admit, I have a house in Castries at the top of Lastic Hill.

I am always asked what made you move to Saint Lucia. In truth: I don’t know. Of course, it was the house. It was Belmont, always Belmont. To seem engaging, I have a little spiel which is in part true: I was on my way to Jamaica to visit Bob Marley, there was a Writer’s Guild strike and the rest is history. All true but not the answer. In fact, there was the parking space incident. A famous old Hollywood screenwriter told me that he was livid, just livid: his parking space on the studio lot had been taken away. His wife was out of town, he had dyed hair and there were crystal figurines in a custom made vitrine in his Beverly Hills living room. I thought get me out of here. Is this all there is? Just get me out of here or I will end up bemoaning a parking space. I had always wanted a life of adventure. I had few unfulfilled aspirations. In effect, I wanted to enjoy life, see the wide world and understand it. I don’t like company towns.

Logically, therefore, I bought a nineteenth century wooden house in a West Indian port town. Really. I was alone. In my early thirties. I had absolutely no business doing this. I knew nothing. A room of one’s own? Fine. Sure. Got it. Yup. But a large hundred year old house on a West Indian island no one had ever heard of? And, to make matters worse, I already had a house of my own, a perfectly lovely 1920’s hacienda in the Hollywood Hills right under the “H.” What was I doing here? In this Quarterly devoted to architectural masterpieces, I suppose someone has to make the case for architectural madness. I fell in love with a house. I wanted to live in that house. Period. It’s been the longest relationship of my life.

What happens in a case like mine? The oft-documented restoration decoration frustration of the chattering classes abroad, the plumber not showing up (what plumber?), the psycho phone company where I am sure I am on the Do Not Resuscitate list, the sheer inconvenience of everything island, ad nauseam. Of course. And worse. However, Belmont has been much more than that. It is a Creole stately home, one of the finest and now most well-preserved houses in the Eastern Caribbean, those islands that stretch from Anguilla down to Grenada. It was built in 1895 by a local Saint Lucian family. It is not a colonial house. Its tradition is decidedly French. It sits atop Lastic Hill, named for the man who built it, overlooking the port of Castries, the capital of Saint Lucia. It is surrounded by nearly nine acres of tropical trees and flowers. It is a very pretty property, and it has been very important to me. Belmont made me learn. History, art, architecture, botany, horticulture, birds, trees, flowers. On my own, no classes, no internet at the beginning.

Just me and books. It kept me fit: swimming in the warm Caribbean Sea, no winters. It kept me out of the rat race: I will never have a parking space on the lot. It’s been the perfect setting for dogs, parties, affairs, house guests, reading, thinking, long friendships. And I have had the exquisite privilege of living in its considerable beauty for nearly half my life. Sometimes, I wonder what it is like to be Belmont, itself. As in the case of, say, Marilyn Monroe, Grace Kelly, Jacqueline Kennedy, Jon Hamm, what must it be like to have everyone exclaim, Oh, but you are gorgeous! I’ll never know. But it happens to Belmont all the time. Living in beautiful proportions in a lovely old house in perfect weather does not hurt, I can assure you.

Why am I selling? Because it’s time. Will there be an “Out of Castries?” No, but not for lack of material. I own a small apartment in Paris in the heart of Saint- Germain. It’s always something. And, like all of us, I am running out of time. When I leave Belmont, it will show no sign of me. I didn’t build it, I did not draw it from scratch, I didn’t even commission it. I just lived there. Yes, I saved it. But I will be forever grateful to this wonderful house which gave me happiness at times, solace at others, watery dawns, heart-stopping sunsets and delicious mangoes. I did it.

Architectural Digest: On the MarketMarmol-Radziner with James Turrell