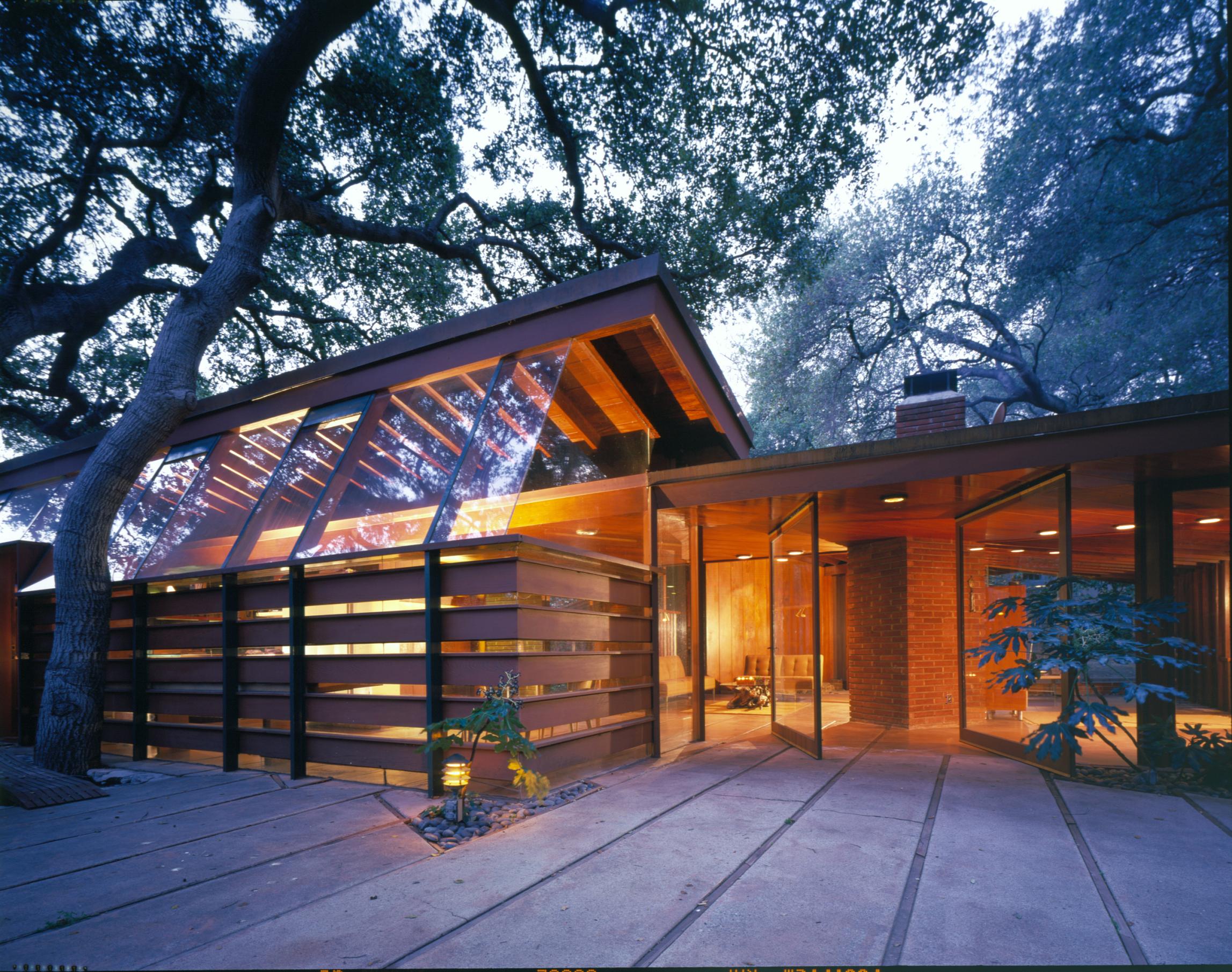 John Lautner once said of Los Angeles that it was a place that made him “physically sick.” Not high praise from anyone, much less an architect who eventually set up shop here. Los Angeles became Lautner’s home despite himself; it was the base for his practice for 50 years and the place where his modernist designs received both accolades and criticism. Aficionados who consider Lautner a visionary include the American Institute of Architects’ Los Angeles chapter, which awarded him a gold medal for lifetime achievement in 1993, the year before his death at 83. Others agree with British architecture critic Reyner Banham, who asserted that Lautner was merely a fabricator of “one-off dream houses.” Many of Lautner’s buildings have been destroyed, and his work has often been eclipsed by that of his mentor, Frank Lloyd Wright. He still has many devotees, drawn to the sheer originality of his buildings. Lautner himself expressed his disregard for following the pack: “I always had a horror of any kind of routine, and that’s one of the reasons that I ultimately chose architecture.” The result is on display at a retrospective at the Hammer Museum in Westwood: “Between Earth and Heaven: The Architecture of John Lautner,” running through Oct. 12, attempts to peel back the layers of thought spun by a man who was decidedly hard to pin down. The exhibition, curated by architect Frank Escher and historian Nicholas Olsberg, will travel to other cities in the U.S. and Europe.

The show examines some of Lautner’s best-known work, including the Chemosphere on Mulholland Drive (1960; a circular home resembling a spaceship, atop a single support) and the Arango residence in Acapulco Bay (1973). His futuristic designs have been darlings of Hollywood, used as backdrops for movies like Brian De Palma’s Blow Out, McG’s Charlie’s Angels and the James Bond films Moonraker and Diamonds Are Forever.Away from what he considered the toxic sprawl that defined the city of Los Angeles, Lautner also designed a number of residences and commercial buildings in the foothills – Glendale, Pasadena, Alhambra, Burbank and La Canada Flintridge. From a Lincoln-Mercury car dealership in Glendale to a lab and living quarters for Caltech’s Owens Valley Observatory in Pasadena (which was designed but never built), Lautner seemed to find inspiration in this area. As Karol Lautner-Peterson, the architect’s eldest daughter, said in a recent interview, “My father would have preferred jobs outside L.A. proper, because he hated L.A.”Certainly Lautner had a complex relationship with the City of Angels, but, according to Escher, he had compelling reasons to practice in Southern California. “L.A. has a tradition of experimentation, ranging from the utopian ideals of politics to the arts,” says Escher. More important, the region was awash in new money and residents who could afford to hire someone to design a unique home as a personal statement.”My father was fortunate to have clients who were open to new ideas and new places, not run-of-the-mill boring subdivisions – interesting clients with interesting sites to build unique structures,” says Lautner-Peterson. Unfortunately, Lautner – like Wright – was a poor businessman. “Time and time again, he would pour so much of himself into his projects that he was constantly on the verge of bankruptcy,” says Escher. “At times, he wouldn’t get paid.”That didn’t stop his curiosity from being ignited by the technologically superior building materials that came out of World War II – concrete, steel, aluminum, malleable wood, plastics and glass. “As far as structure is concerned, I think we should continually experiment and discover every new material and method and use it,” Lautner wrote.

His Gantvoort residence in La Canada Flintridge, built in 1947, used a prefabricated roof frame and radiant-heated, ochre-colored concrete floors. Overhangs provided shade in the summer and protection during the winter. The large glass walls allow in plenty of light, connecting denizens to the outside. Lautner preferred earthy materials like brick, wood and concrete, and he sited the house to take full advantage of its serene environment. “The simplicity of the plan shows real livability, in spite of regular factory-type construction,” Lautner once said, according to Frank Escher’s 1998 book, John Lautner, Architect (Princeton Architectural Press). Gantvoort sits on a one-acre lot surrounded by oak and fruit trees and visited by the occasional deer. Wood-clad curved-steel trusses span the length of the house, curved elements that contrast with the squared, built-in benches next to the brick fireplace. (As of press time, the home was on the market with an asking price of $1.895 million. Listing agent Sam Buchanan says Gantvoort might be demolished so the land can be developed.)
With views of the surrounding mountains, Lautner’s three-bedroom, two-bath house feels more like the groundskeeper’s quarters of a botanical garden than a private residence. Escher described the architect as “an artist who does land art.” Lautner was known to sit on a site and contemplate it for days. “He has a poetic approach to nature, and [he] designed from the inside out,” says Escher.

His Schaffer Residence in Montrose, constructed in 1949, was also built around oak trees, similarly honoring the natural environment (This home too is currently on the market, for $1.775 million). Crosby Doe has sold architectural homes for 30 years and believes, like Frank Escher, that the Schaffer Residence is a “masterpiece.” A recent restoration brought the two-bedroom, two-bath home to the level of “fine art,” says Doe. Word is spreading about homes with this type of provenance. “It’s like a blue chip stock,” Doe added. “It’s a way of protecting your real estate investment because these types of homes have their feet planted in two worlds, the art world and the real estate world.” But beyond any monetary aspect or prestige is “what the home gives back to you in terms of living in it. The experience of the architecture is really valuable,” says Doe.

The Schaffer home is 1,700 square feet, small by today’s standards. Slanted glass walls bend to the will of oak trees that lean precariously towards the house. Lautner used two-by-eight redwood planks to screen the building as a fence and also as a direct cladding, adding to the linear feel of the site in contrast to the vertical trees. His nearly obsessive use of floor-to-ceiling glass allows a oneness with the outdoors. The interior, especially the dual-faced brick fireplace, is simple and uncluttered, with clean lines accentuating the minimalist space.

Lautner worked on nearly 20 projects in and around the foothills, including Henry’s Restaurants in Glendale, Pasadena and Arcadia, which grew out of his 21-year relationship with the chain. Lautner-Peterson recalls feeling “overwhelmed” when her father took her to see the Glendale restaurant for the first time. “I will never forget it,” she said of the curved-wood interiors, trellised walkways and homey feel. Though they have since been demolished, the restaurants had, as Escher said, “an appeal in the same way residences do: They are shelter. Architecture should help the occupant transcend the world they know.”
Lautner apprenticed under Wright at Taliesin, the architect’s Wisconsin estate, where he undoubtedly learned more than any professional schooling could have provided. There he was responsible for multiple chores, which included cooking and building a small home by hand. “Architecture should be concerned with everything in life,” he once said. “So when you know how to build physically, then you know what stone or wood is good for; you know how to plan; you know what to design. The typical architecture school, they don’t even know what the materials are good for. They’re making sketches and plans, but they have absolutely no meaning.”

That was never a problem for Lautner. Nonetheless, much of his work is unknown outside of architectural circles. “There’s a lot of interesting architecture in L.A.,” says Escher, “but it’s drowned out by a sea of mediocrity.” What’s more, many of Lautner’s works are private residences, inaccessible to the general public. As for his better-known buildings, they often evoke a futuristic world, with designs that appear derived from space-age imagery. Yet Lautner’s focus was always on making habitats more hospitable for his contemporaries. “Technology will give us more command, more knowledge of information,” he wrote in notes later found at his mountain cabin in Three Rivers, California. “But if we do not concentrate on the social and human values, the world will be better for the machines than for humans.”

“Between Earth and Heaven: The Architecture of John Lautner” runs through Oct. 12 at the Hammer Museum, 10899 Wilshire Blvd., Westwood. Tickets cost $7 for adults and $5 for seniors. Admission is free for museum members, students and visitors under 17 accompanied by an adult. The museum is free to all on Thursdays but is closed Mondays. For more information, call 310. 443.7000 or visit hammer.ucla.edu